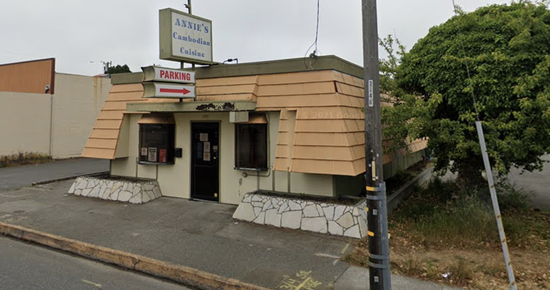 For more than 11 years, the unpretentious little restaurant Annie’s Cambodian Cuisine – located at 101 North (Fifth Street) between U and T streets in Eureka – has been a favorite with locals, who flock there for the delicious food and friendly service. Now this beloved business could be in trouble after plans were submitted to the City to demolish Annie’s building to make way for a drive-thru restaurant.

The project proposal — submitted by claimant Humboldt QOZ Fund, LLC on Feb. 14 — includes plans to demolish the three existing restaurant buildings and build a Starbucks, along with an as-yet-unnamed restaurant in their place. The two plots containing Annie’s and Sizzler would be combined into one plot and an 1,805 foot restaurant would be built on the site. A 1,000 square foot Starbucks would be built on the site that currently houses Subway. Both restaurants would include parking and drive-thru.

Reached by phone Friday afternoon, Annie’s co-owner Laura Chau-Yang said she didn’t want to comment at this time. But it seemed that any plan to demolish the building was an unpleasant surprise for Chau-Yang.

It’s also unclear how long it will be before demolition or construction takes place, but it will likely take some time. Slattery told the Outpost that the project referral has been sent to local regulators, who will have until March 1 to report any issues with the project. If there are no issues, then the applicant will need to submit all necessary permits, including a demolition and building permit, and will need to submit construction and design plans for approval before construction can begin.

Slattery didn’t yet know what drive-thru restaurant might be that would replace Annie’s. But he said the city would be more than willing to help the owners find new space, so Annie’s Cambodian kitchen can continue to serve the community.

‘Buffet’ show puts a new spin on ‘all you can eat’ | qboro: Arts, Culture & Living