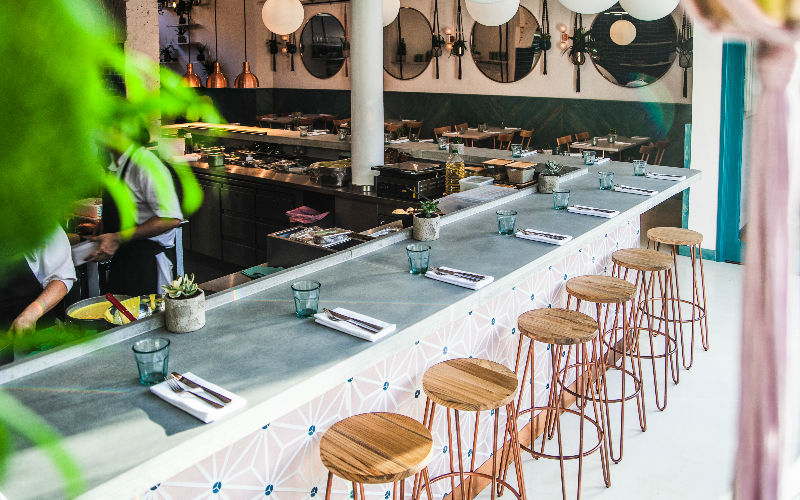 The Wild Food Cafe in Covent Garden is one of the oldest vegan restaurants in town, as it existed before veganism became a food trend, but it is rather small. Now there’s a second, bigger Wild Food Cafe in Islington, which means there’s more vegan food to shop around. And with a ton of plants, large copper-edged mirrors, millennial pink chairs, and wooden tables, the Upper Street restaurant certainly has that cool feel-good vibe.

The drinks menu is extensive, with a range of healthy shots, smoothies and juices – we particularly liked the Sour Power (orange, rosehip, hibiscus, lime, mint and kombucha) – for those in the wagon as well as plenty of alcoholic options for those without. It’s a traditional three-course menu rather than sharing plates, and it’s all plant-based, with a strong raw component as well. The best of the starters was the hasselback squash with pine nut saffron mayonnaise, squash curry cream and a sprinkle of crispy BBQ jackfruit for texture.

While this site has a new wood-fired oven for veggie-based pizzas, we opted for the Wild Unroast instead, a lighter and more colorful version of a walnut roast with chestnut stuffing, squash puree and mini vegetables, and the Wild Green burger, a raw patty of pink olives and shiitake mushrooms in an alarmingly green yet super soft bun, almost like a bao. And if you think you don’t like kale chips, wait until you try these – we don’t know what magic dust the kitchen sprinkled on them but they were GOOD.

The desserts, both the special beignet (which on our visit came with a salted caramel topping) and the raw chocolate tart, were probably the most impressive in that they felt extremely indulgent even though they were vegan.

The raw look can take a bit of getting used to as it means many dishes are served hot/cold, but all the dishes we ate were of a substantial size so we definitely felt satisfied, and that has not always been the case with a plant. -meal based.

There’s nothing tame on the menu at Wild Food Cafe