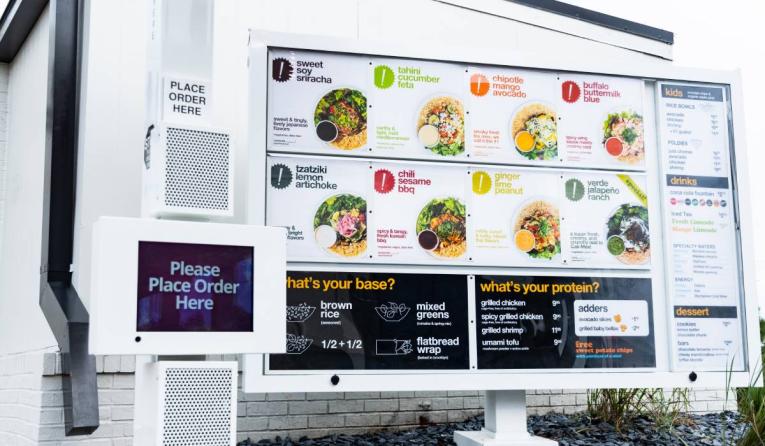 As any quick service restaurant operator – and customer – knows, drive-thru menu boards come in all sizes, shapes, colors and capacities.

Increasingly, the emphasis is on the latter of these attributes as devices become more technologically adept and, therefore, progressively efficient and effective.

Menus are better and smarter than ever, whether through visual enhancements, with stunning animations and colorful digital displays; hearing advances, thanks to upgrades to speakers and microphones; and developments in artificial intelligence.

“All of the menu innovations I’ve seen are tied to technology,” says Tom Cook, director of King-Casey, a Westport, Connecticut-based restaurant and foodservice improvement company. “[The future] is not in static tables,” he says.

A simple way to think about it is in terms of the evolution of smartphones. “In the beginning, you had flip phones where all you could do was make calls,” he explains. “Now think about what smartphones can do” as improvements and new options are added every year.

“It’s pretty clear to innovative brands, like ours, that digital boards are the future,” says Nate Hybl, general manager of fast casual gusto in the booming Atlanta area! The channel will transition to these boards, with “stunning, crisp animated graphics” over the next few years.

Advances in technology can make the drive-thru experience more natural, but “you have to be careful,” notes Sean Thompson, chief information officer at Freddy’s Frozen Custards & Steakburgers, based in Wichita, Kansas. The goal is for a painting to be “cool versus scary”.

Animation alone in recent years has moved beyond menu boards showing, for example, steam rising from a cup of coffee to a video display of how coffee or any other menu item is created . A zoom video might show a restaurant worker talking to a guest in the drive-thru.

Meanwhile, menu-driven enhanced speaker systems not only see improved voice recognition, like Siri or Alexa, but they can rely on artificial intelligence to learn how to differentiate a customer’s voice from the noise of background or to adapt to different accents.

“In the past, microphones would record everything, and it would have been difficult for a system to adapt to that,” says Minh Le, Chief Information Officer at Checkers and Rally’s. “Now you can distinguish a human voice from cars, street noise or birds.”

Artificial intelligence (AI), or machine learning, is the key to future quick-serve menus. This will allow operators to change their maps, even automatically, “depending on factors such as weather or product availability,” says Cook. And by learning what customers order, “the menuboard can adapt to that. It’s about capturing data and using analytics.

The use of AI can provide operators with a deep dive into what motivates their customers and goes beyond the individualization that already occurs by linking the customer ordering experience, including menu interaction , mobile applications and loyalty programs.

Examples of these advances can be found in the firmament of fast food.

Screens can show the barista taking a guest’s order, the menu item, and the cost. Customers can also view AI-powered food and drink recommendations, based on the weather, relevant drinks and food for the day, product availability, or popular items that other customers in the store have ordered, a spokesperson for the Seattle-based giant said.

Not only does the barista camera bring a more personal touch to drive-thru, but there have been instances where hearing-impaired guests in their cars have been able to order a menu item in sign language or by other means.

Earlier this year, the chain began rolling out a revamped digital ordering screen layout in drive-thru in the United States. The look and feel is similar to Starbucks’ mobile app, builds on existing features like the barista camera, and has a visual order confirmation that mirrors the in-app ordering experience.

Data collection and implementation is key to extending digital drive-thru menu boards beyond pretty pictures and nifty graphics, says Freddy’s Thompson. The idea is to reduce ordering and fulfillment times and facilitate menu choices through a data-driven design strategy.

“Most people who come to a menuboard make their decision in seconds,” he says. “So you have to be quick, but tell the whole story.” Static menus change slowly, and even manual entry on digital boards, from prices to popular items, can be laggy.

Freddy’s new system was built using over 3 million rows of data to see what customer behavior was saying. The tests added an extra million rows.

For gusto!, moving to a new system means that the chain’s unique menu requires order confirmation to be heavily integrated with the lane’s digital technology. “Managing this will help us be more nimble on change and allow messaging to be more dynamic,” Hybl says.

“This is where art meets engineering from a communications perspective,” he notes. At the same time, the channel intends to complete its improved menuboard with a human connection by

Continue to have an employee in the drive-thru lane during peak times to assist customers.

Checkers and Rally’s new voice assistant has proven to be very accurate, with an accuracy rate of 98% overall and almost 100% in some places.

The system is triggered when a guest walks up to the menu, and the guest is greeted in real time by a cloud-connected human-sounding female voice. The voice will respond to the visitor not just taking the order, but suggesting a combo or other menu item, answering consumer questions, making corrections, and then providing the payment amount.

Most of the time, a restaurant employee “isn’t involved,” Le says. Instead, the least pressured worker at the pick-up counter refills drinks, makes fries, and accepts payment. In the more than 170 restaurants where the system is installed, “employees love it”.

The assistant continues to learn. “The longer he works in a store, the more the machine learns and builds its dictionary,” notes the CIO.

In most Checkers and Rally units, the new voice assistant comes at minimal cost for franchises that have updated their timer and headset systems in the past five years.

Certainly, cost is a factor as technology continues to evolve. “As we roll out all of these things, we need to be sensitive to the needs of our franchise community,” says Thompson. These devices are not free, “so let’s do it where it makes sense, for us and for the franchisees.