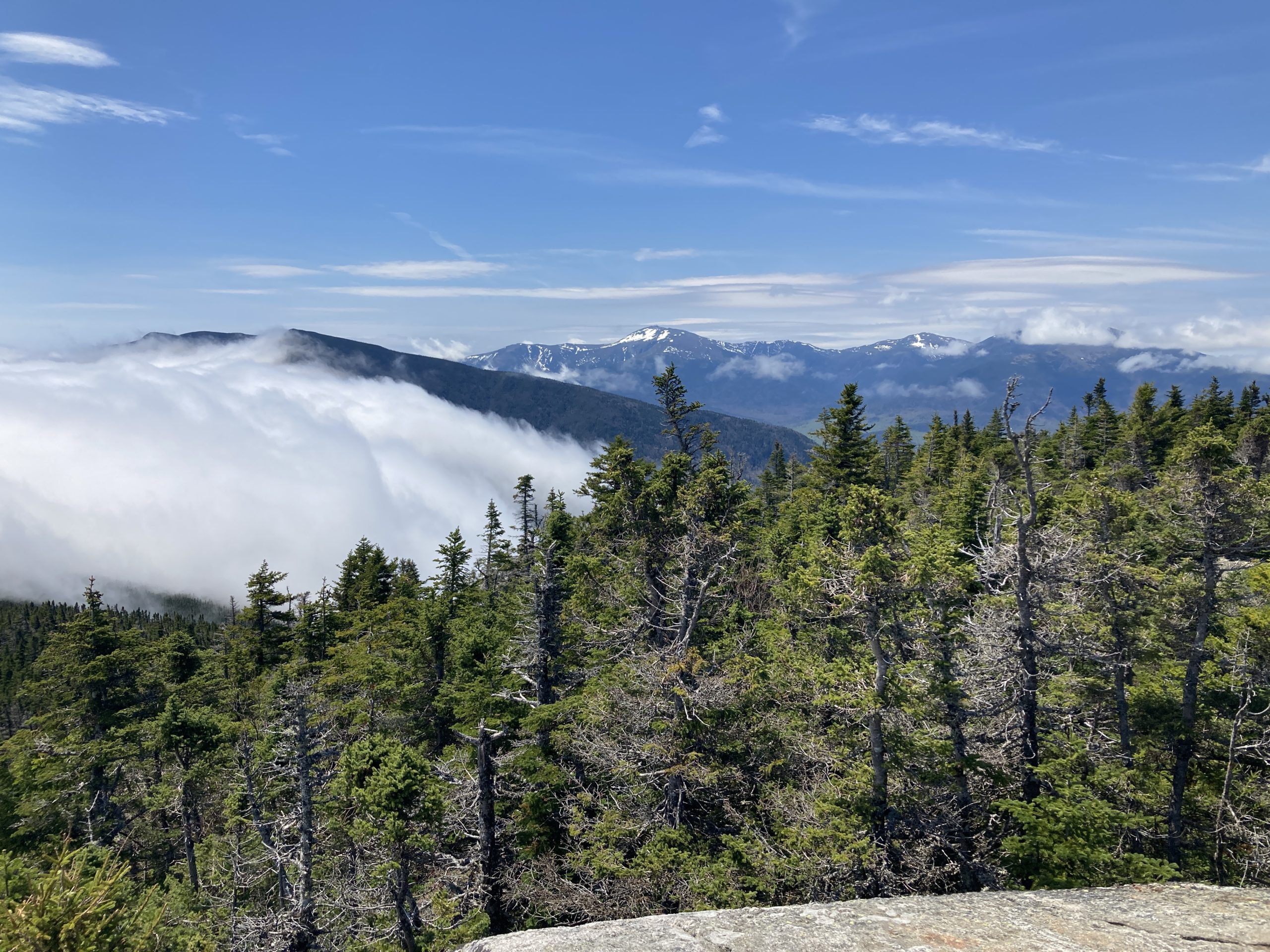 As much as I hate to say it, I’m ready to end all this hard stuff. The Whites lived up to the hype in their greatness and difficulty, there’s no doubt about it, and I’m grateful for that. It has been fun, and admittedly frustrating, to get my ass kicked so often and thoroughly by those mountains. Incredibly rugged views and trails were worth it, real highlights of the AT, but I got tired. And I think most of all, I miss the routine and rhythm of the easier days, when I could wake up, have lunch and go to bed at the same time every day with 25-30 miles under my belt. Strict camping regulations and unstable weather have swept away any semblance of “normality”, and it has been an exciting challenge in many ways. However, when I’m worn and raw, as the trail grind will inevitably make me feel, having a routine to use as a crutch is such a comfort. I’ve started to miss that kickstand, and I’m willing to turn cruise control back on, if only for a day or two. No camping restrictions, no demanding weather conditions. Heck, the trail can be tough, but I just want to have lunch at an appropriate time rather than when a rain break allows. As I emerged from the last of the great peaks of the White Mountains today, I still felt a long way from the next cruising day. Maine is getting closer, but almost feels farther away. There are still plenty of notoriously difficult trails to ride, but I’m a little closer than I was when I woke up this morning. With uncertain weather ahead and a close of fire to navigate, that must be enough. One step at a time, I head north.

My decision to camp near Mount Hight for the morning views paid off, but barely. After a restful night’s sleep, spent amidst the quiet company of dwarf spruce, I emerged from camp onto the bare summit slabs amidst a swirling cloud just in time for it to part, revealing the view I was looking for. The complete presidential sweep of the north, from Washington to Madison, rose like a row of jagged teeth above a valley of clouds. They shone in the bright sun, looking more rugged and intimidating than they did when I walked through them. Perhaps it was an effect of the sea of ​​clouds, which always awakens the wild spirit of a landscape. Anyway, the view left me humbled that I was allowed to walk on and around these peaks with relative ease. What a glorious day it had been.

The cloud engulfed me whole as I hiked the trail up Zeta Pass over steep patches of ice that made me glad I was still wearing microspikes. But I didn’t put them. Oh no, it would have taken two minutes, then two more to take them off again. Instead, I crawled slower than an ant, placing my step with the precision of a mountain goat on the stones that cut through the smooth surface. I wasted more time than I should have just put on the spikes, but I held on to my pride and put on a good show for no one in particular.

I followed the trail a short distance to South Carter Mountain and then along the ridge to the rest of the Carter Range. A snowy sidewalk covered the trail for most of the wooded sections, but it was firm and solid, just the way I like my mattresses. Captured clouds gradually soaked my sleeves as they brushed against the spruce needles that walled the narrow path. Honeycomb stone slabs made up the other parts of the ridge, and I could only guess what view they offered until the clouds came down again near Middle Carter Mountain. A white mist still wafted from the chasm to the east, but Pinkham Notch and the Presidentials were generally clear to the west. I could follow my ridge to Carter Dome and Mount Hight, and it looked like I was patrolling the great border wall between clouds and empty air. A shapeless gray splashed, poured and disappeared over the ridge, still resting among the trees, still restless.

I was back in the cloud for the trip to North Carter. The next descent was heartbreaking and left my nerves raw and my quads on fire. With the humidity still stubborn, the steep slabs were slippery and the ice draped in the most troublesome places. At one point I had to hang from baby trees growing along the trail to balance myself on a tongue of clear ice flanked by featureless stones. I wasn’t the first to cross the hurdle this way, I was sure. It was the only way until the ice melted.

I filtered the water once the trail softened up a bit, unhappy and hungry. Then it was an uneventful ascent into the cloud that shrouded Mount Moriah. The sun began to break through and I saw my shadow again as I followed two-day hikers along slippery walks through mossy bogs. At first we overshot the trail to the summit, but then we corrected our mistake and climbed the last major peak of the Whites for the nobos, or so my guide would have me believe. The blue sky made me hopeful for another view, so I sat on the flat rock for an early lunch and waited. Shannon and Nathan joined me and we shared a few good words while eating our own snacks. Sure enough, Mount Washington appeared through the clouds, the other presidents just a moment later. Realizing that this was probably the last best view of these mighty peaks for me, I gave them a long look, remembering the good old days we had spent together.

I left the others to enjoy the fresh summit air, unblemished with my hiker musk. The massive descent to the lowlands below was thankfully free of ice, though the boardwalks were almost as slippery. I swayed through a few stomach lurches, but found myself once on my butt and then completely starfish on my back when my foot slipped on a wet slab. Luckily my pack caught me comfortably and with practice I was sure it would be a great technique for descending some of the smoother sections.

The trail leveled off as the spruce changed to glowing beech and maple along the Rattle River. The mosquitoes came out too, but I felt too good and tired to care. For the first time since Vermont it seems, I walked hastily, without taking care of my footing. I barely remembered that speed. Near the trailhead, I caught up with a SpiceRack and wandering Tango that led the rest of the way to Blackbird.

Even though it wasn’t even 4pm, it wasn’t clear if I would keep walking after a quick refueling visit or stay overnight. A two-mile fire shut down on the AT was right ahead, and unfortunately ATC hadn’t been available with a backup despite over a week of finding something. Maybe I was wrong in thinking that finding reroutes was up to them, but now I had to find out for myself. But such important work could not be done on an empty stomach, so we went to Gorahm to prepare some food.

I found an easy alternate route using my Gaia app while we munched on delicious bagel sandwiches at a cafe. Then an hour later, we headed to the Chinese buffet, adorably nicknamed “Die-nasty” by a friendly local who stopped to flirt with us. I was a bit disappointed that I could only manage two plates of sparkling food, but I was able to walk away on my own and breathe comfortably. It was a victory.

As the sky began to darken and the clouds began to lighten in color, Spice dropped me off at the trailhead, and I hiked the mile up and across the Androscoggin River. It was nice to settle my heavy stomach in the cool evening air. It was even nicer to have a couch to rest on once I caught up with Blackbird along a dirt road. We didn’t need to cook anything so we made some tea and sat down to swat the mosquitoes well after dark. An episode of Love is blind erased the slippery memories of the morning and my worries for the next stretch of trail. If the hard stuff were to continue, then at least I could forget her for a night. What I couldn’t forget was the General Tso tofu, which gurgled, churned and puffed in the best way. There would be no forgetting of the General, just as there would be no forgetting of the Whites.

This article was originally published on my hikefordays.com blog. Check it out for trip reports from my other hikes including CDT and Sierra High Route.

This website contains affiliate links, which means The Trek may receive a percentage of any product or service you purchase using the links in articles or advertisements. The buyer pays the same price as they would otherwise, and your purchase helps support The Trek’s ongoing goal of providing you with quality hiking advice and information. Thanks for your help!

To learn more, please visit the About This Site page.