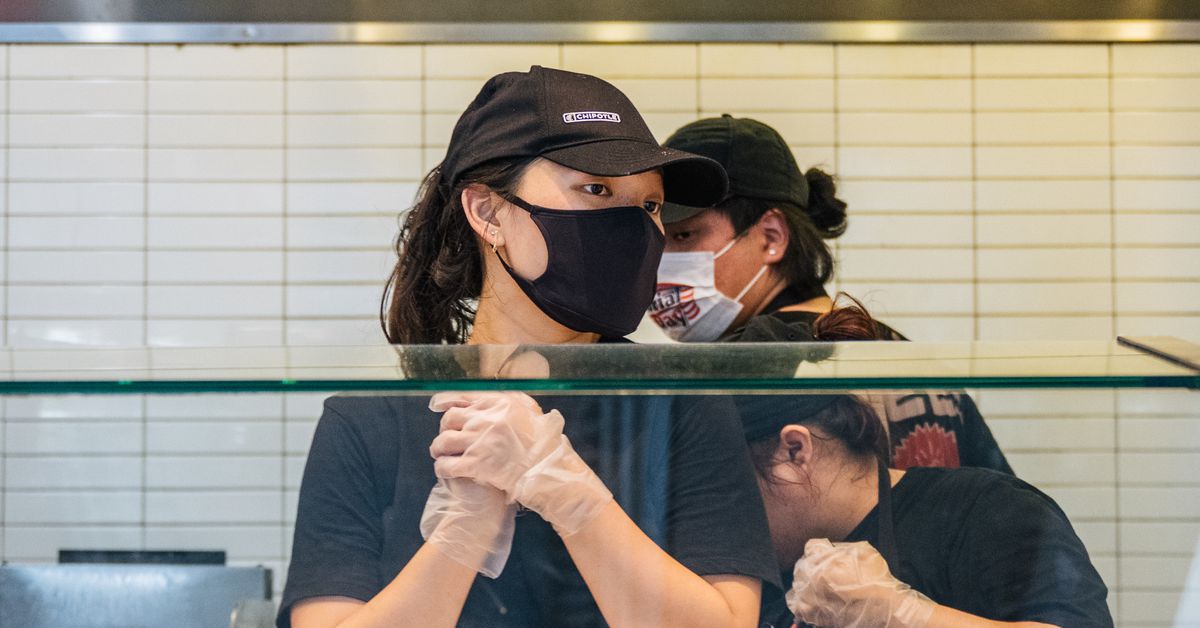 At this point, it happens practically every week. A video of a food worker or restaurant customer doing something ostensibly (or blatantly) wrong takes over TikTok, inspiring heated debate over whether the particular behavior was appropriate or not. Back in December video of a Chipotle location in Port Saint Lucie, Florida has gone viral after user @jayothebarber shared a clip of the establishment in apparent chaos. In the video, which has racked up more than 4 million views, an employee chops meat on an overflowing cutting board and the assembly counter is strewn with chunks of corn, cheese and lettuce that have escaped from their stainless steel containers.

In the comments, some users were quick to come to the defense of the workers. “Point and help clean up if you think it’s so easy to clean up during a rush,” one user wrote. Although most reviewers tended to agree with this sentiment, others sided with the original poster. “How mad are you all at the creator,” read another comment. “We just let companies have zero standards now?”

The TikTok algorithm, which served the video to thousands of viewers who have never been within a thousand miles of Port Saint Lucie, is fueling an ongoing war. Amid all the viral dance crazes and grumpy thirst traps, a near-constant argument on TikTok rages over expectations for how people should behave in restaurants — both as workers and guests.

In the end, it is two ideological camps that are equally heard in this debate. First, you have the people who are eager to speak out against what they consider unsafe or unsanitary practices, portraying it as an act of public service. And then you have the people who, whether from their own personal experience of working in the industry or simply from a deep well of empathy, stand up to defend the shamed workers in viral videos.

This delineation can be seen in another recent viral TikTok, in which a Wingstop worker is ashamed of having used his bare hands place the raw chicken wings in a deep fryer. In the comments below the video, which has since been deleted, many were horrified, arguing that the employee should be fired for daring to touch raw chicken without gloves. (Of course, most TikTokers aren’t food safety experts; those who are actually knowledgeable about food safety practices were quick to point out that Food and Drug Administration food code only requires food service workers to wear gloves when handling “ready-to-eat” foods. Others pointed out that wearing gloves when handling raw meat is a recipe for cross-contamination, and that even in the most upscale establishments, chefs don’t wear gloves when preparing tenderloin. mignon and lobster.) There are countless examples like these. , triggering flame wars workers who eat at workor whether yes or no show up at the end of the night to request abandoned DoorDash orders for free is a reasonable thing for a human to do.

What sets TikTok apart, as opposed to Facebook or other social media platforms, is how it encourages people, especially young people, to engage in bad behavior to gain weight. Meanwhile, TikTok’s algorithm is terribly sophisticatedable to push content to its 800 million users in ways that other platforms have yet to be able to achieve.

TikTok videos also have a shocking propensity to “go IRL” at lightning speed, with impacts far beyond the confines of video sharing. Viral stunts, like Travis Scott’s fans blasting his song “Sicko Mode” out of McDonald’s drive-thru windows to order rapper McD’s collab meal, unwittingly employ fast-food workers in content creation for the platform. These influence takes run the gamut from silly annoyances, like the Travis Scott trend, to serious trouble — last year, a money-saving Starbucks “hack” that involves using an ID number employee on your receipt in an attempt to scam rebates has gone viral, a trend that baristas said it was practically “designed to get [them] fired.” (Of course, this isn’t just happening in the food world — TikTok challenges are everywhere. Think back to last year’s “sneaky licks” challenge, where kids ripped out their bathroom sinks. or the Milk Crate Challenge, in which thousands of people risked their lives to prove they could climb a pile of plastic milk crates.)

There’s also a deeply human reason why these videos have such appeal to people on both sides of the argument: we’re all a bunch of messy bitches who love drama. And many of us love nothing more than the sense of superiority that comes with standing on moral high ground, especially if it means racking up a bunch of likes in the process.

Since the start of the pandemic, working in restaurants has become exponentially more difficult. From an increased risk of contracting COVID-19 to abusive customers and staff shortages, these workers are struggling, all while being told they’re “poorly qualifiedand receive a salary that do not cover their bills. Throw TikTok into this mix, with an endless appetite for content that sometimes involves relentless bullying from strangers, and the picture is quite disturbing.

While TikTok trends can come and go, annoying customers and terrible working conditions can go on forever. What if, instead of stepping back and filming the deranged diatribes of “Karen” and physical attacks that are being perpetrated against these workers, people started to intervene as the workers were being attacked? Or, more importantly, maybe it’s time we all admitted that what’s happening with restaurants right now is the result of massive systemic issues like a global supply chain crisis and all the other consequences of capitalism in advanced stage? Considering we don’t live in a world ready to address these issues, we could, at the very least, stop pleading the behavior of a group of underpaid 19-year-olds who were left in charge of a Chipotle .