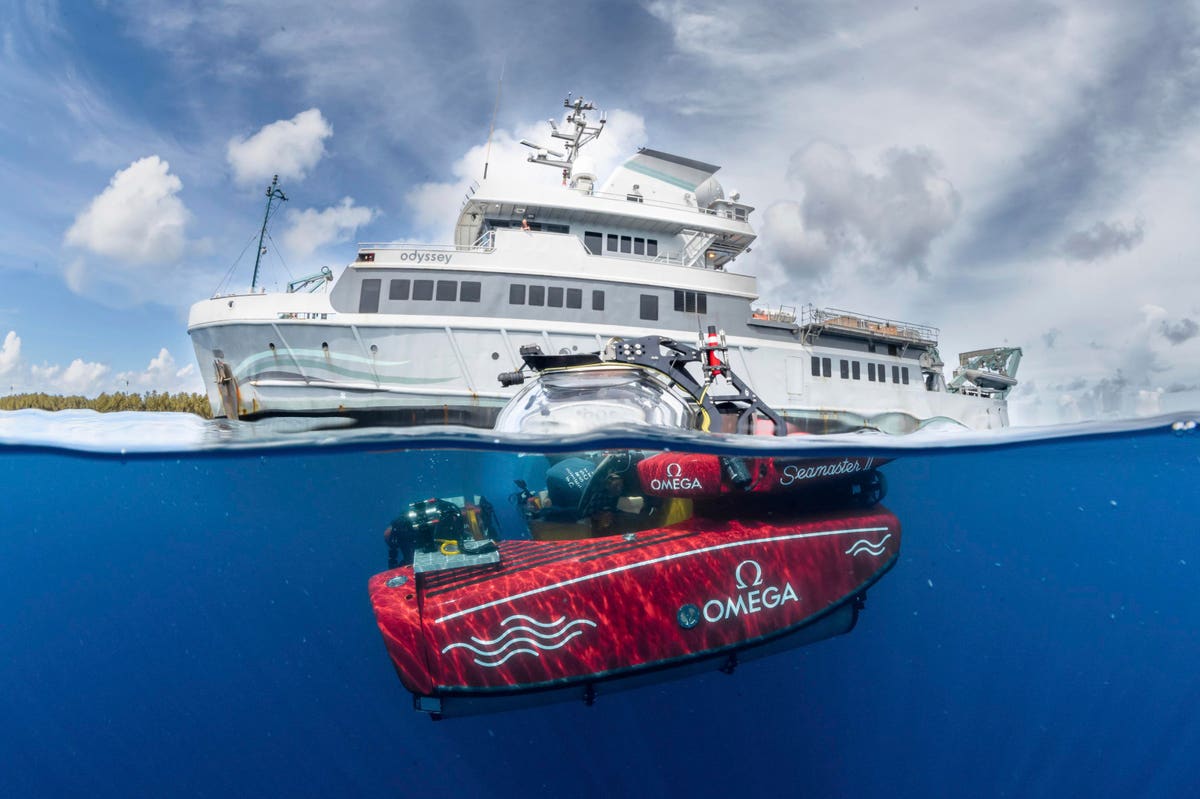 The ‘trap zone’ in the Maldives is a buffet for sharks

The bubbles slowly rose to the surface as the Omega Seamaster II submersible sank lower in the water column. Above, the sun streamed through the water and left a bit of warmth on the scientists’ faces before they turned their attention to the inky depths below. Coming from the University of Oxford, the researchers were eager to see what the depths around the Maldives were holding.

The Maldives – made up of 1,192 islands – are located in the Indian Ocean, crossing the equator and covering an area of ​​around 90,000 square kilometres. That seems like a lot, and the number is mind-boggling when you realize that only 298 square kilometers is dry land. Instead, the beauty lies beneath the tiny, jewel-like islands lined with white sand that sparkle like diamonds. Home to around five percent of the world’s reefs, the explosion of colorful structures is home to thousands of species of fish, including large pelagic fish such as manta rays and whale sharks.

While the clear, shallow waters around the Maldives are famous and well known, the depth remains a mystery. Enter the Nekton Maldives mission, which is undertaking the first systematic survey and sampling of the Maldives from the surface down to 1,000 meters (3,280 feet) below. The submersibles were equipped with several cameras to record their descent in the dark, along with other scientific tools to collect biological samples and map the previously unexplored area using sonar. The video evidence, together with the other data, revealed an undiscovered ecosystem that is already hailed as very important by the government of the Maldives.

At around 500 meters (1,640 ft), deep swarms of small organisms known as micro-nekton thrived. Micro-nekton is the name of an intermediate group between zooplankton and nekton, two small aquatic organisms capable of swimming independently of the current. Distributed between the surface and 1,000 m depth, it is a very diverse group. Known as one of the animals that connects primary producers and consumers at the top of the food chain, the data collected by the Nekton Maldives mission has been trapped by those at the top of the food chain, including shoals of tunas and sharks.

Thus, the nickname “The Trapping Zone” was decided for this new discovery. “The discovery of ‘the trapping area’ and oasis of life in the depths surrounding the Maldives provides us with critical new knowledge that further supports our commitments to ocean conservation and sustainable management, and almost certainly supports the fisheries and tourism,” said Maldives President HE Ibrahim Mohamed Solih. Lucy Woodall, associate professor of marine biology and lead scientist at Nekton, agrees with the significance of the latest discovery, and says the whole team is interested in understanding exactly what’s going on here: “Is it something specific thing at 500 meters, does this life go even deeper, what is this transition, what is it and why? Why do we see the patterns we observed on this expedition? This will allow us to better understand the deep ocean.

But why are the sharks here? Part of the answer may lie in the fact that the territorial waters around the country have been turned into the Maldives shark sanctuary. One of less than twenty shark sanctuaries in the world, it provides a safe haven for over thirty species of sharks, many of which are globally threatened or endangered. The waters here have a high level of visibility, which also allows for a clearer view of these charismatic animals – which tourists take advantage of! People all over the world enjoy shark diving and snorkeling trips to swim side-by-side with these fearsome predators.

While sharks are commonly seen swimming in the crystal clear shallow waters of the Maldives, the diversity seen here in the dark depths was exceptional. tiger sharks (Galeocerdo cuvier), six-gilled sharks (Hexanchus griseus), sand tiger sharks (carcharias bull), hunter sharks (Centrophore granulosus), scalloped hammerhead sharks (Sphyrna lewini), silky sharks (Carcharhinus falciformis) and the bramble shark (Echinorhinus brucus) are just a few of the many species documented by the mission. “We have observed sharks in shallower waters in the Maldives before, but for the first time we were able to document an immense diversity of sharks in deep waters,” commented Shafiya Naeem, Managing Director of Maldives Marine. Research Institute. From the video footage, the scientists could see that the plankton swarms were attracting large deep-sea fish which, in turn, were attracting sharks to the area. Many of the above species are shallow water animals that can dive to these depths to enjoy the activity.

Lots of food in one area? Count them!

Marine ecosystems are defined not only by the ocean life in an area, but also by the topography of the area (the landscape). “It has all the hallmarks of a distinct new ecosystem,” explained Professor Alex Rogers of the University of Oxford; Rogers was one of the researchers who spent more than 30 hours underwater in the submarines observing the unique trapping area during the expedition. “The trapping area creates an oasis of life in the Maldives and it is highly likely to exist in other oceanic islands and also on the slopes of continents.”

Analysis of the data collected during the mission is ongoing, but it is believed that this discovery could have important implications not only for the sustainable management of fisheries, but also for carbon burial and storage and the climate change mitigation. What the trapping area means for the Maldives is not yet fully understood.