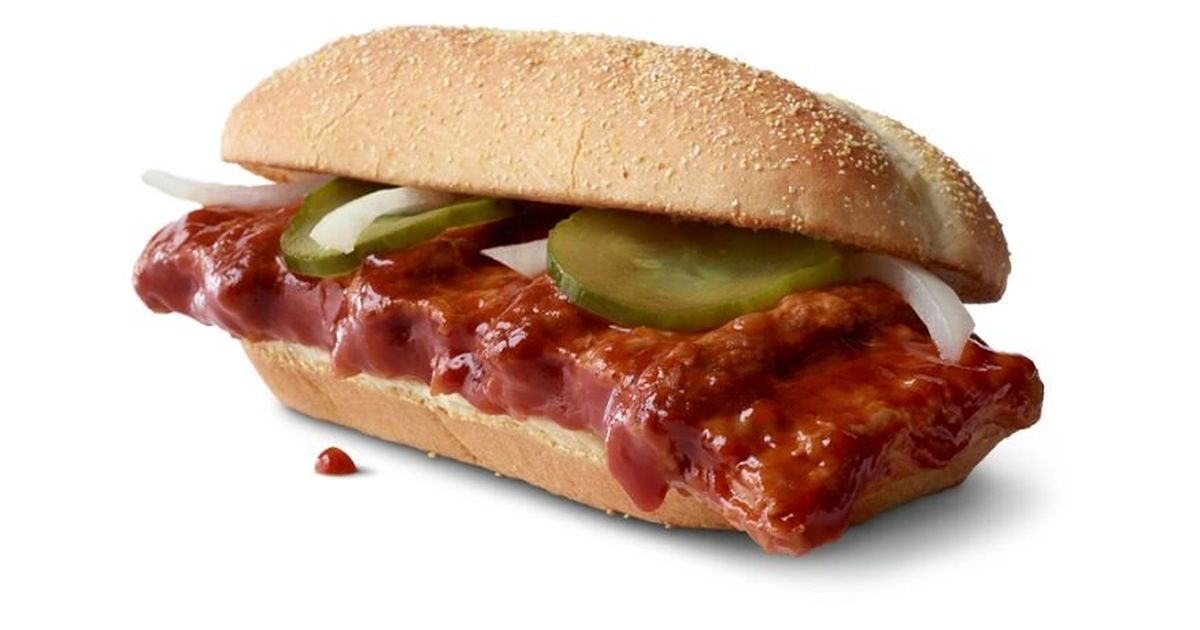 On Friday March 26th I drove through McDonald’s drive-thru for an order of Chicken McNuggets, no sauce, for my 10 year old nephew, Shawn, then next door I paid for a Jumbo Jack with cheese at Jack’s . in the box for myself. It would take over seven months before I paid for a fast food restaurant for myself again, and my “fast food fast” was broken because of my inexplicable love for McDonald’s McRib.

I had no basic reason for fast food – maybe moratorium is a better word than fast, but fast food moratorium isn’t as fun to say as fast food – other than I hadn’t bought fast food for myself for a while after March 26th, so why not continue? Now, there are a few important caveats to this fast. I write about food for work, so I can experience the best cuisine in Spokane – and I’m far from starving, as my grandpa will attest.

Granted, my fasting guidelines were a bit exaggerated, and the lessons learned and wisdom gained are not overwhelming. I saved money by not buying fast food all the time. I felt better, of course, which is a good thing as a type 2 diabetic. Fast food, for me, is comforting and convenient after a long day or week at work, but after a while I enjoyed the challenge of cooking at home when I wasn’t having dinner at work. I did not miss the fast food this a lot.

But after about 180 days, I was like, “What am I going to eat to break this fast food fast?” It must have been something special, but I didn’t think about it too much. Driving up to Post Falls for Popeyes was up for grabs. Then I heard on the radio that McDonald’s McRib was coming back to the menu on November 1 and it was settled: The McRib was it.

Part of the McRib’s appeal is that it’s not always available. It may not even be available anymore as far as I know. And, to be completely honest, the McRibs are messy (I hate messy food), but the oddly shaped boneless pork chop mix, too much tangy barbecue sauce, McDonald’s pickles, raw white onions which are literally off the McRib cutting board without further preparation (luckily I love onions) all on a hoagie bun does it for me.

So I had my McRib, which is celebrating its 40th birthday this year, just in time on November 1 after work, and the seven month fast food was over. As my diabetes counselor told me there are many McRibs in San Diego, all in moderation.

If McRib is a vice, so are fall cocktails lately, and I’ve had three outstanding new seasonal dinner libations in recent weeks. Old Fashioned Maple Syrup in Rusty Moose (9105 West US Highway 2, (509) 747-5579, rustymoosespokane.com) is ultra-smooth and smooth – and paired with maple and hazelnut crème brûlée, it’s maple heaven in Airway Heights.

The seasonal menu at Tavolata (221 N. Wall St. (509) 606-5600, ethanstowellrestaurants.com) includes the Awkward Family Gathering cocktail, aka “Thanksgiving in a glass” (white rum, Oloroso sherry, Nocino, squash, rosemary and orange juice), as well as the radiusi pasta dish (bianco lamb Bolognese, matsutake mushrooms, oregano and pecorino). Both are reasons to be thankful this season.

Check back next Wednesday in Food for more details on Steam Plant.

YaYa Brewing Co. (11712 E. Montgomery Drive, Spokane Valley, yayabrewing.com) on Friday launched its new pilsner, Dishman Hills Pils (love the name!), a fundraising collaboration with Dishman Hills Conservancy, featuring a party at their brewery and tasting room, and attending the celebration of 4pm to 8pm was busy and constant.

Ten percent of the pilsner’s sales, which I approve, go to Dishman Hill’s efforts. YaYa co-owner Jason Gass was on hand and we discussed his upcoming collaborations including Friday’s Pancake and Beer Dinner at Café Crepe Sisters in Kendall Yards and another event to be announced in mid-December. .

Meanwhile, No-Li Brewhouse raised over $ 27,000 in its No-Li Day Fade Huckleberry Lemonade Hard Seltzer Wednesday through Friday fundraiser to benefit Spokane Quaranteam and Toys for Tots. “I’m just amazed but not surprised by our No-Li community,” Cole Bryant, son of No-Li Brewhouse owners John and Cindy Bryant, said in an email. (Cole and his brother, Jack, both work for the family business.)

Spokane loves its beers with and for a cause. Hi!

I continue to keep an eye out for pop-up dinners, or the menu in general, at Feast World Kitchen (1321 W. Third Ave., (509) 608-1313, feteworldkitchen.org). I ordered the authentic and tasty Indian food from Noreen Hiskey, and I was sad to miss the Sudanese food last Wednesday. However, Ricky Webster’s Portuguese pop-up menu was available the following evening.

I don’t remember ever having eaten Portuguese food, but I really enjoyed everything that was cooked by Webster, including the pork marinated in garlic wine (it reminded me of the Filipino dish in adobe), mushroom soup, chestnuts and pearl onions (which is this week in the Kitchen with Ricky’s Recipe in Time for Thanksgiving) and egg pies, which are available at Webster’s Rind and Wheat in Brown’s Addition.

I love the diversity of cuisine in Spokane – variety is indeed the spice of life – and it gets better and better.