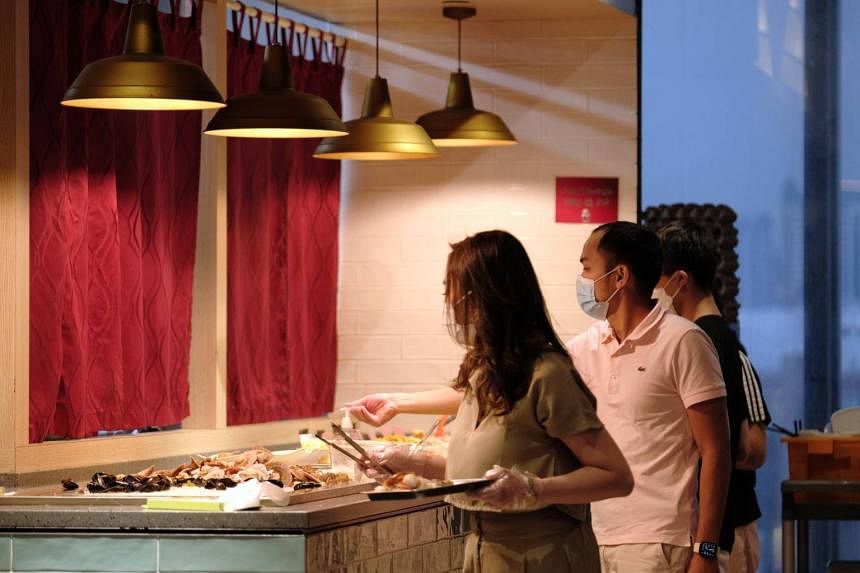 Restaurants and customers welcome the return of self-service buffet lines

SINGAPORE — Restaurant manager Omar Zabaceba, in keeping with his usual routine, personally greeted the midday crowd at Shabu Sai hotpot buffet restaurant in Tampines 1 on Saturday April 30, but one feature was off the menu.

Staff no longer brought all food items to customer tables.

The Singapore Food Agency announced on Friday that diners can help themselves from self-service buffets from Saturday.

The move has been long overdue by many since this popular dining option was canned on April 7, 2020, amid the pandemic.

While buffets were allowed to resume from April 12 last year, food had to be served by restaurant staff.

“With the first day of the return of self-service buffets, a lot of customers are thrilled,” Zabaceba said.

Customers told her it was more fun to see the choices and choose their own food instead of having to constantly check in with the staff.

“The staff and I are relieved at this change. Now self-service buffets free up staff to focus on serving essentials such as soups and meats, which is less stressful and tiring,” he added.

Previously, staff had to deliver food, utensils and even condiments.

Mr Tan Yu Hao, 26, a customer of Shaburi & Kintan Buffet at Jem Mall in Jurong East, has walked away from buffets and restaurants in general amid the pandemic, but said relaxing the rules could now entice him to join the buffet queue once a month.

“We can hang out anywhere, but hanging out with friends at the buffet is always more fun,” he added.

For Paul Wu, 43, and his family, who also ate at Shaburi & Kintan Buffet, it was their first buffet since the pandemic began.

“It’s nice to be able to serve yourself without having to be served by staff. It’s so much more convenient,” he said, adding that he now hopes to visit buffet restaurants at least twice. times per month.

But some customers’ appetites were tempered by what they saw.