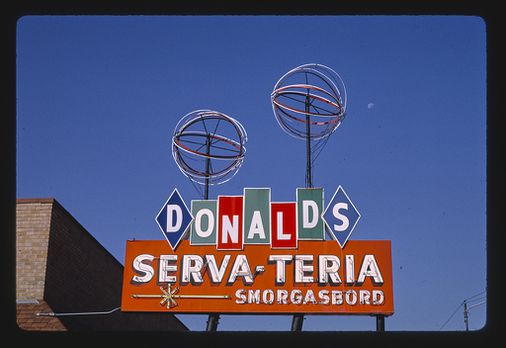 What’s in the buffet that keeps us coming back for seconds (and thirds and quarters)?

Get Weekend Reads from Ideas

A weekly bulletin from the Boston Globe Ideas section, forged at the intersection of “what if” and “why not”.

The modern American buffet owes a debt to the Scandinavian smorgasbord. The spread, which appeared in the 16th century, has its roots in the brännvinsbord, a table of spirits and aperitifs set up during banquets. Scandinavian immigrants brought the “smorgy” tradition with them to the United States in the late 1800s (the term “smorgasbord” is said to have first appeared in American print in 1893), when it merged with d other emerging forms of the sideboard here. Historian Jan Whitaker has traced the concept’s early history, from colonial-era ‘supper clubs’ to 1800s ‘free meals’ – dishes prepared by taverns to boost sales of accompanying alcohol . These became, writes Whitaker, “buffets or cafes”, where, for a small fee, businessmen could easily obtain prepared meals.

Teebers in the temperance movement tried to scuttle those early buffets, but the pattern reappeared, adapting to the times. During the Great Depression, for example, the all-you-can-eat format was used as a gimmick to bring people back to restaurants. The hope was that by offering an unlimited amount of cheap food at a fixed price, people would have more incentive to dine out. Even etiquette specialist Emily Post helped promote this style of dining with a calculated 1933 endorsement of the newly invented “buffet server,” which contained boiling water in the base of a dish to ensure food stays hot.

But the buffet we know today wouldn’t be what it is without Las Vegas. According to the story, El Rancho Vegas, the first casino resort on what would become the Vegas Strip, was trying to figure out how to keep visitors from leaving after the evening’s headliner finished his set. The answer was the Chuck Wagon buffet (later renamed Buckaroo), which debuted in 1946 and charged $1 for “every possible variety of hot and cold entrees to appease the howling coyote in your innards.” It was a success. Other casinos rushed to match the midnight all-you-can-eat supper—and by the 1950s, the Vegas buffet concept wasn’t just for late-night patrons. The Dunes and Last Frontier seaside resorts introduced morning “hunting breakfasts”, which took the name from a precursor to the brunch, often including champagne, which was popular among the British elite.

This rise of buffet culture has exploded beyond Vegas, into chains like Sizzler and among family-run Chinese restaurants. (The Chinese buffet in the United States dates back at least to 1949, when Chang’s Restaurant ran an ad in the 1949 Los Angeles Evening Citizen News.) My dad, on the other hand, swears by Shakey’s buffet lunch bouquet. . He describes the wonder he felt in the 1970s when he first sat down to unlimited amounts of pizza, garlic bread, chicken. For him, the appeal wasn’t just about value – although the value, he points out, was amazing – or about quality (which was good!). It was about freedom – almost anyone could afford to sit at Shakey’s and eat like a king.

It was that feeling of admiration that he passed on to me as a kid in the 90s, just when buffet culture in this country was arguably reaching its peak. My memories of that time seem almost drawn from that scene in “Mad Men” where the Draper family picnics in the park and leaves all their trash behind on the grass. Just as waste wasn’t recognized as a global problem until the 1970s, neither was post-Cold War hyperconsumption exemplified by the peak days of the buffet—at least I don’t. I never questioned. I just remember the thrill of coming back to plate after plate of food. It was the cheap abundance that the times seemed to promise.

But like so many things we’ve enjoyed in this decade, the prize was there, even if I wasn’t ready to see it yet. Buffet food waste can be nothing short of shameful – a 2017 report found that nearly half of the food served at hotel breakfast buffets was left untouched. And then there are the health concerns (a food safety trade publication has kindly dubbed the potential outcome “all-you-can-eat illness”), which curtailed the buffet’s popularity even before COVID hit.

But the buffet can change. Take the stand of Food Unfolded, a platform funded by the European Union to reconsider the future of food. He offers us, coming out of COVID, to rethink the buffet so that it serves sustainable and fairly produced food and minimizes waste and germs.

The potential to recreate better, after all, is in the buffet’s very DNA. Its first iteration – the feast – is a tradition that dates back centuries in eating habits around the world. Cultures have long used these all-you-can-eat affairs to promote feelings of brotherhood, to reuse leftovers, and even as a source of culinary innovation, as the need to differentiate dishes demands new ways to mix ingredients.

I admit it: I miss the buffet. With the upsurge in COVID cases, I won’t be going back anytime soon. But I look forward to the day when I’m back to fill my plate again – and again. One truth about the buffet is that it makes you want more.

It makes me think back to my family’s favorite buffet story, fittingly set a few miles from the Las Vegas Strip at the now-closed Great Buffet in Sam’s Town. As the night drew to a close, a family friend opened her purse, placed a napkin over its contents, and scooped up a serving of Trifle – a dessert with thin layers of sherry-soaked cake or of wine, fruit and cream – directly inside. I remember seeing the tremor subside before it carefully closed the bag around itself. When she caught us seasoned buffet veterans staring, she looked at the purse, looked at us again, and said, “In case I get hungry later.”

Jackie Mansky is editor-in-chief at Zócalo public squarewhere a version of this essay originally appeared.