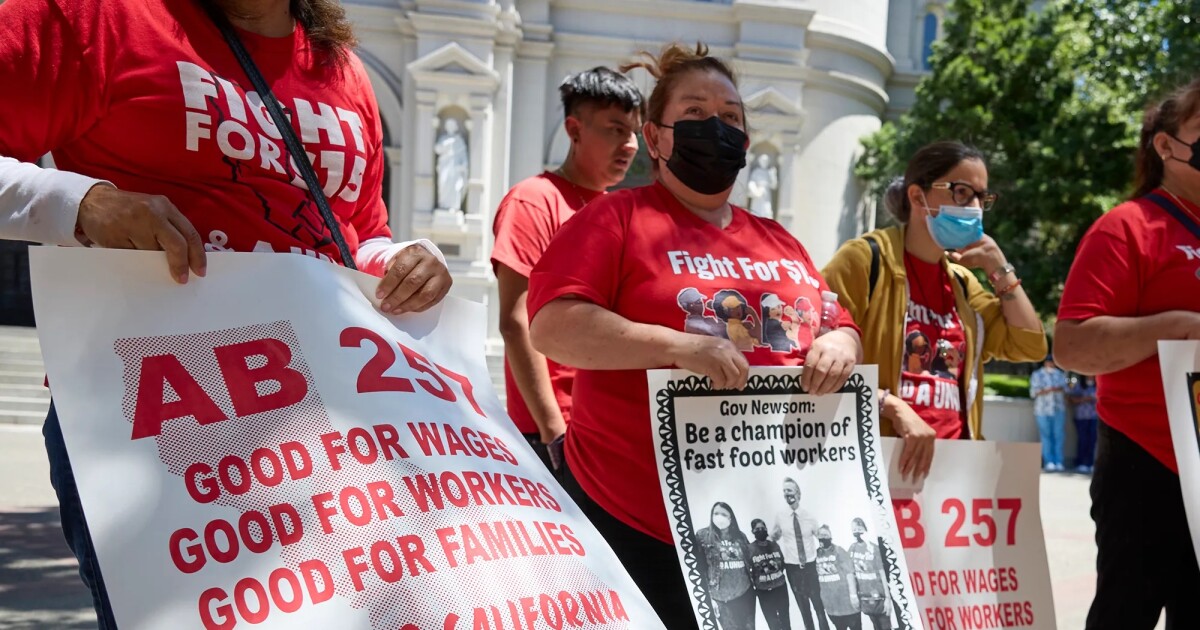 On Labor Day, Governor Gavin Newsom announced that he was signing a first bill in the country creation of a board to regulate wages and working conditions in fast food restaurants.

The new law will give workers’ rights advocates a long-elusive negotiating foothold in a low-wage industry that employs more than half a million non-union workers statewide.

“California is committed to ensuring that the men and women who have helped build our world-class economy can share in the state’s prosperity,” Newsom said. said in a press release. “Today’s action gives fast food workers a stronger voice and a seat at the table to establish fair wages and essential health and safety standards across the industry. I am proud to sign this legislation on Labor Day when we honor the workers who keep our state running as we build a stronger, more inclusive economy for all Californians.

Pushed by the Service Employees International Union and fiercely opposed by business groups, the FAST Recovery Act barely passed the state Senate with the minimum number of votes. The vote was just as tight in the Assembly a few hours later. Several Democrats abstained; after it was passed, six swapped their votes in support.

The new statewide council would be able to set standards in the fast food industry on wages and working conditions such as safety measures and even a restaurant’s temperature. Union rights advocates say the bill would give workers bargaining power in an industry where union representation is hard to come by due to high turnover and franchise ownership.

Lawmakers significantly narrowed the bill to push it toward final passage after several moderate Democratic lawmakers balked at earlier proposals to give the new council broad regulatory authority over the industry. Lawmakers added a slew of amendments last week to address the concerns of business owners.

In a major concession, lawmakers removed a provision that would have held back fast food companies co-responsible for wage and labor violations at franchise locations. The bill’s sponsor, Democratic Assemblyman Chris Holden of Pasadena, said it was an “important item” to sway some colleagues.

In recent years, California has extended this type of labor law liability to other sectors – from janitorial and gardening contractors to building owners and the companies that hire them, for example – under its efforts to combat wage theft. But fast food franchise companies have long avoided this liability in federal and state labor law.

Even without this provision, union leaders were calling the bill a victory. SEIU President Mary Kay Henry told a rally outside the Capitol that the bill was a “watershed moment for working people.”

Of particular importance: Include workers on the board alongside industry representatives, said Columbia University labor law expert Kate Andrias.

“Flipping our state’s existing legislative structure and regulatory platform is no way to help workers.”

The United States and California used boards for other industries before setting minimum wages, especially during the first half of the 20th century. But, Andrias said, the fast food bill is “a broader and more ambitious twist” on those past efforts by having workers sit directly on the board and covering a wider range of working conditions.

Business and catering groups, which spent big on tv advertising opposing the bill, issued a statement urging Newsom to veto it. They said fast food was being unfairly targeted and warned new regulations would force restaurants to raise prices at a time of record inflation.

Broadcast and digital ads called the bill a “food tax.”

“Overturning our state’s existing legislative structure and regulatory platform is no way to help workers,” Jot Condie, president of the California Restaurant Association, said in a statement.

Newsom signed the bill, even though his finance ministry opposed itsaying it would create ongoing costs and aggravate the delays in the state labor enforcement system.

Supporters said the bill incorporates their discussions with the Newsom administration.

In addition to removing labor liability for fast food chains, the bill’s other changes include provisions preventing the board from requiring new paid leave for workers or regulating how fast food operators plan. worker hours. Additionally, any minimum wage set by the board would be capped at $22 an hour in 2023 and subject to inflationary increases in future years. The bill also includes a six-year expiry date.

Some food businesses would be exempt from the council’s rules, including bakeries, grocery store fast food outlets and chains with fewer than 100 locations nationwide, which is an increase from the previous threshold of 30 or fewer locations. .

It was not immediately clear how many companies or workers would be excluded by raising this threshold. For franchise brands operating in California, the number of chains matching the description increased from 149 to 84, according to the International Franchise Association.

The bill would give workers and their advocates an equal number of council seats as company representatives. The rest of the council would include two representatives from the governor’s administration – the Labor and Workforce Development Agency and the Office of Economic and Business Development.

Sen. Dave Min, a Democrat from Irvine, said he “initially had deep concerns” about the legislation but supported the more limited version.

“I think it’s our duty to protect our business centers from overly burdensome state regulations, but we also have to balance that with the rights of the workers who serve us,” he said.