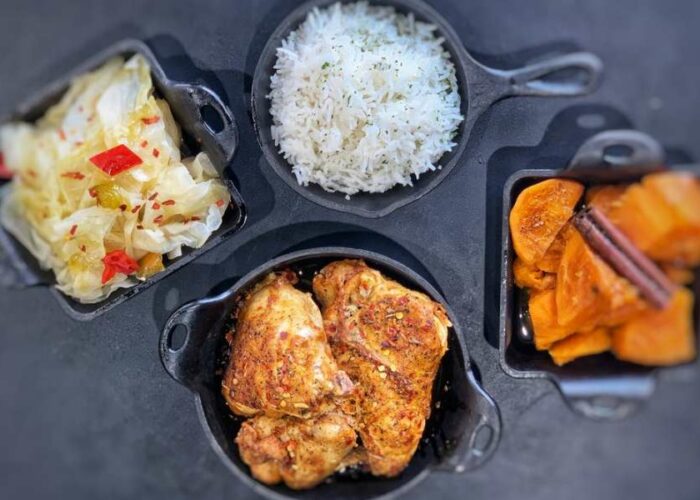 New soul food restaurant in Pearland and 4 other openings

The second location of The Greasy Spoon, a soul food bistro, will open to the public on January 20 at 10009 Broadway in Pearland. Photo: Yelp Houston

Opening of a new soul food restaurant in Pearland

The second location of The greasy spoon, a soul food bistro, will open its doors to the public on January 20 at 10009 Broadway in Pearland. Described as a restaurant elevating the culture of Southern cuisine, the first Greasy Spoon opened in 2020 at 636 Cypress Station by owner Max Bozeman II. The menu features dishes such as smothered pork chops, Cajun jambalaya pasta, fried catfish, oxtails, blackened catfish, fried Cajun shrimp and catfish, okra and thighs stuffed turkeys. The restaurant recently was featured on Food Network’s “Food Paradise” series.

The concept of quick and casual chicken salad, Chicken Salad Chicken, opens its 11th Greater Houston location in Pasadena on January 12. The store, 5409 Crenshaw, is the 21st location in Texas. The brand offers a dozen different variations of chicken salad ranging from traditional to savory (lemony basil; barbecue) to fruity and nutty to spicy (jalapeno; Buffalo flavor), as well as chili cheese, salads, soups and sandwiches. The Pasadena location will mark the opening with giveaways to early guests Jan. 12-15.

Hot chicken fever remains in play for 2022. Dave’s Hot Chicken, known for its menu of chicken tenders and tender sliders with six levels of hot sauce, will open a new location at 6324 Highway 6 South in Missouri City on January 13. The brand that launched as a pop-up parking lot in California in 2017 quickly took off and boasts a range of celebrity investors. The Missouri City store joins two other Houston stores at 614 Dennis and 12161 Westheimer.

The new Regal Indian restaurant is coming to the Woodlands

Amrina, which translates to “princess,” is the name of luxury hospitality group Kahani Social Group’s first restaurant concept that will open the Indian-inspired eatery in Q1 2022 at 3 Waterway Square Place in the woods. Amrina’s menu – described as modern Indian with creative flourishes – will come from chef Jaspratap Bindra, executive chef and managing partner of the hotel group.

Russo’s will open two new locations in the Houston area

Russo’s New York Pizzeria and Italian Food will open restaurants this spring in Katy and Richmond. Although the Richmond location is yet to be announced, Katy’s location will be at 22723 Morton Ranch Road. This 2,200 square foot space will feature an open kitchen design and a large outdoor patio. The restaurant, which has multiple locations in the Houston area, will offer Russo’s full menu of Italian entrees, salads, pizzas, pastas, calzones and sandwiches.

Greg Morago writes about food for the Houston Chronicle. Follow him on Facebook or Twitter. Send him topical tips at [email protected] Listen to it on our BBQ Mindset Podcast to learn more about barbecue culture in Houston and Texas.