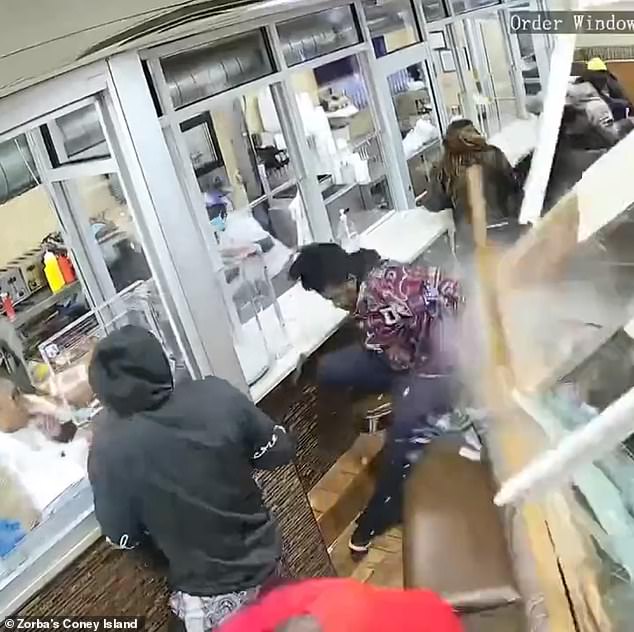 Surveillance footage posted to social media over the weekend showed the horrific moment an SUV crashed through the window of a crowded fast food restaurant in Detroit, sending people rushing for safety .

According to W X Y Zas several customers lined up for food.

The impact of the crash sent customers flying through the restaurant, but miraculously, according to police, no one was injured.

Detroit police have now identified the suspects in the chilling video and are investigating the incident as a hit-and-run with surveillance footage from outside the restaurant showing the driver driving away after impact.

“The video is disturbing and disturbing to say the least,” Deputy Chief Rudy Haper told WXYZ in a statement. “The suspects clearly have no respect for human life and must do the right thing and turn themselves into authorities immediately.”

The names of the suspects have not yet been made public.

DailyMail.com has contacted the Detroit Police Department for more information. 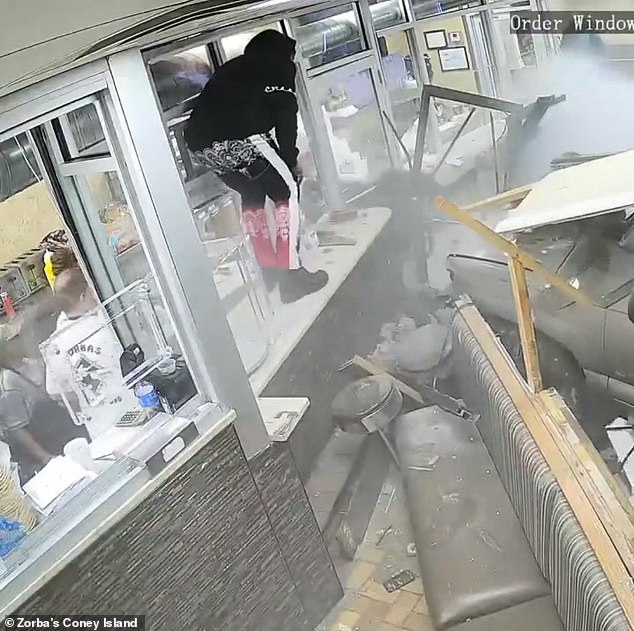 The crash happened around 1am on New Years Day, leaving the restaurant in shambles as at least three people were hit by the car. 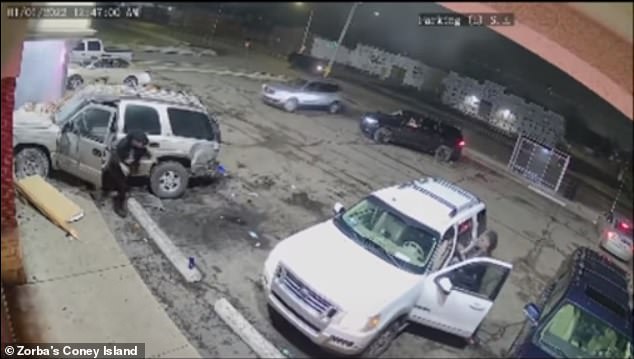 Detroit police are investigating the crash as a hit-and-run, with surveillance footage from the store’s parking lot showing the driver getting out of his car and driving away

Surveillance footage of the crash showed customers queuing at the Zorba’s Coney Island order counter early on New Year’s Day when a man seated at a booth was pushed towards the window by a gray SUV.

He crashes into the control window, but manages to avoid serious injury and is able to get up and run to safety before returning behind the control desk, which is shattered and shattered on impact.

Another woman stuck near the counter could be seen knocking on the order window for help, while footage from the front door shows a man standing in line completely knocked down by the car.

Others were seen running as the car crashed through the glass, while others hid behind the window as shouts and shouts rang out. 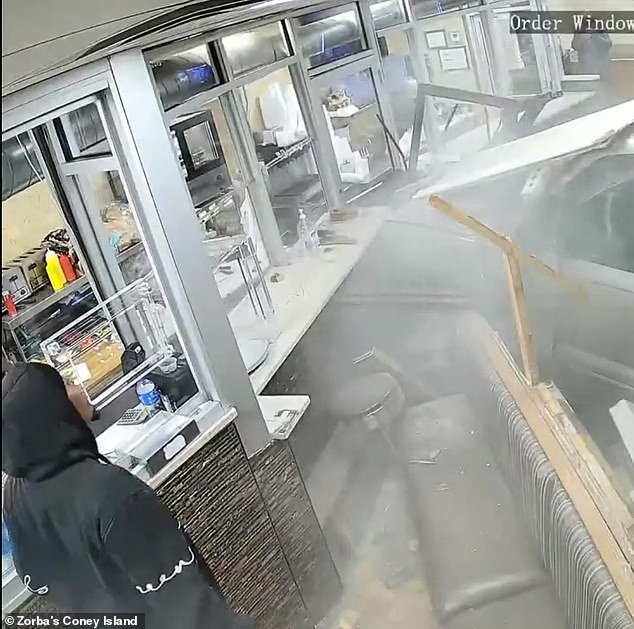 The driver crashed directly into the fast food order window 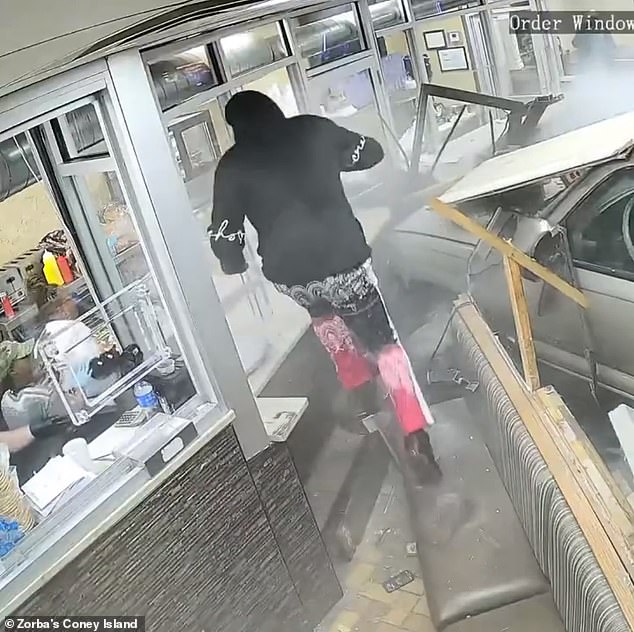 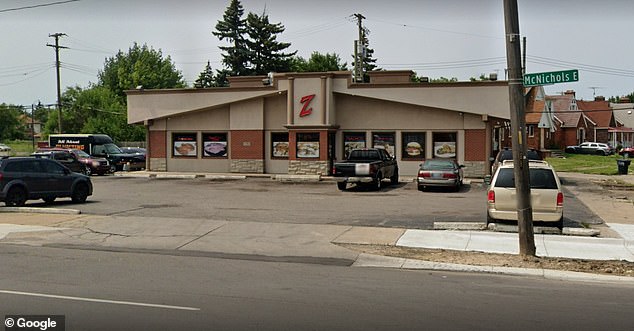 Meanwhile, security footage taken outside the restaurant showed the gray SUV speeding towards the parking lot.

He drives past two parked cars, scraping them as he goes, and smashes into the window, leaving rubble in his wake.

The driver ends up reversing the SUV as the people inside could be heard screaming.

Once the front of the SUV is moved back far enough, a man can be seen climbing out of the driver’s seat.

He is soon chased by a woman who came out of the passenger side door of the car and yelled at him “I f****** knew that” and “What the hell is wrong with you?”

As she goes to get something from the driver’s side, the man walks away from the camera, hands on his head.

Following the exchange, store manager Lisa Foster said the man appeared drunk and staggered as he tried to hide behind the restaurant’s trash can.

The woman in the video quickly found him, Foster told WXYZ, “and was screaming ‘Lorenzo, Lorenzo’.” 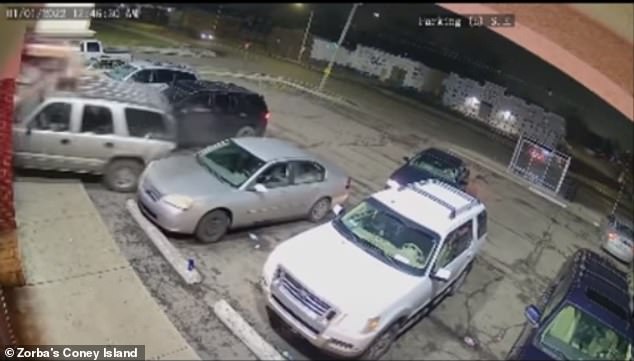 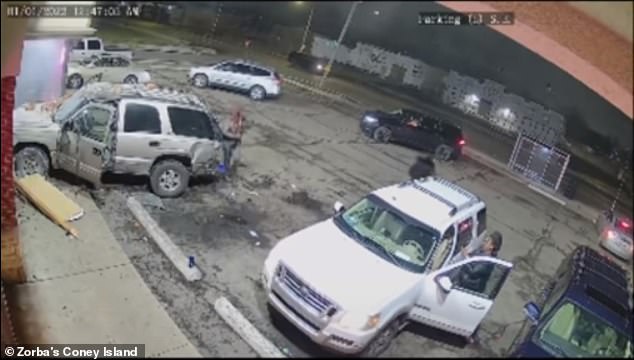 After the crash, the driver managed to back up and escape the car as a woman in the passenger seat chased him and yelled at him.

Foster said her boss and some of her colleagues “literally had to open the door to lift this big brick” of a woman.

Fortunately, no serious injuries were reported.