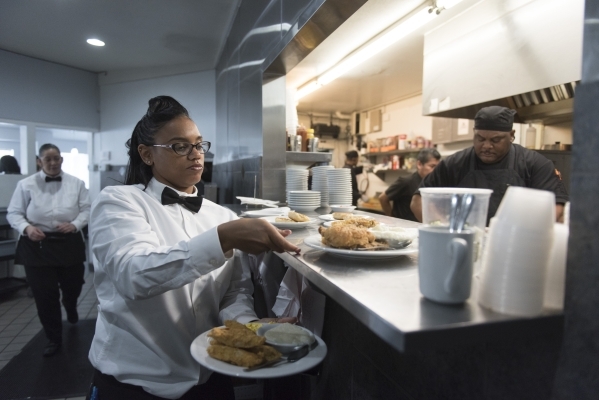 Soul/southern food has been on a waxing and waning situation in Southern Nevada for years, with some places opening to great fanfare but a brief future, others going out of market, and even established restaurants falling by the wayside. a long way in tough economic times. Through it all, the M&M Soul Food Cafe has survived.

If I remember correctly, the first M&M’s restaurant in Las Vegas opened at least 10 years ago in the northwest part of the valley. It moved a few years ago to West Charleston Boulevard; much newer is the one we recently visited, on Las Vegas Boulevard South in the shadow of the Stratosphere.

The new spot is a large open space, decorated quite simply and adorned, if we’re not mistaken, with the same decorative tiling that characterizes West Charleston. They also share a devotion to fairly basic but well-executed soul food. In both places, things start well with hot water cornbread, rarely seen flapjack type rounds (in these regions or elsewhere) with a slightly crispy texture that when folded around a little of butter, are heaven on a plate.

There aren’t many entrees on the M&M’s menu and they were out of fried green tomatoes, so we opted for the red beans and rice ($9), served heaped in a bowl, one serving which could easily have been a meal. The beans were suitably hearty and deeply flavored, but this dish posed a surprise. The menu said it would come with a dynamic link. I don’t like hot links due to their too soft texture, but the kitchen had cleverly scored the casing and grilled the sausage which improved the texture exponentially.

The fried chicken ($13.99, plus $1 for all white meat) was good, an incredibly crispy golden coating breaking apart to make way for the moist meat inside. A full portion (half portions are available) was supposed to be three pieces, but since we were served wings with our large brisket half, they were three pieces. (Too much to eat, but that’s what take-out containers are for.)

The ribs ($18.99 for a full serving) have been carefully braised, making them perfectly moist and tender. They come with a choice of sauce or BBQ sauce, and the latter had all the hallmarks of being right out of the bottle.

And the accompaniments. Full portions come with three, which is why we went this route; like the banchan at a Korean BBQ, the side dishes show the strength of a southern/soul-food restaurant, so we wanted to try as many as possible.

The fried okra was perfect, the coating perfectly crispy and the perfect foil for the soft (but not gooey) okra inside. Sweet potatoes have been blessed with a delicate kiss of honey. The potato salad was pretty good; the rice and sauce made us wish we had the sauce with the ribs; and the mac and cheese was good if not extremely cheesy. The cornbread dressing was dry, but what cornbread dressing isn’t?

The service was very good. I had seen comments about slow service, but we were seated and served quickly. Although it seemed to take a bit too long for the red beans and rice to come out, everything else was well timed.

Given the whims that have plagued southern/soul-food restaurants in southern Nevada and my unfortunate lack of a crystal ball, I wouldn’t hazard a guess at the future of M&M Soul Food. But with its hot soulful cuisine and warm Southern hospitality, we hope it will be for the long haul.

How to open a fast food restaurant in India