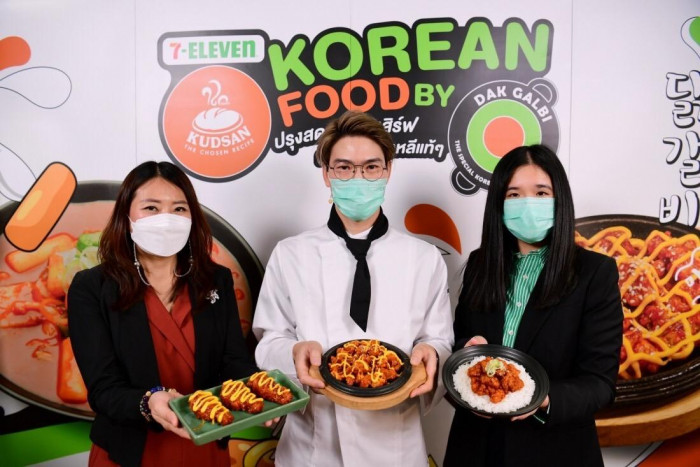 Ms. Kanokorn, left, and Ms. Preeyawan, right, announce a collaboration to provide freshly cooked Korean meals at Kudson cafes on the second floor of select 7-Eleven stores across the country.

Korean food is perceived as premium in Thailand. Thais rarely order it for takeout, mostly from chain restaurants in shopping complexes, hotels, or Korea Town on Sukhumvit Road.

Korean restaurants have been operating in Thailand for more than two decades, but only gained popularity after the South Korean historical drama Dae Jang Geum broadcast locally in 2005, telling the story of an orphan cook who becomes the king’s first female doctor.

In 2020, the market value of Korean food was estimated at 2 billion baht, with an average growth of 4-5% per year.

“We believe the Korean trend will last a long time in Thailand, with the cuisine expected to become a traditional local food within the next five years,” said Preeyawan Tantasuralerk, senior vice president of Dak Galbi Group.

This collaboration began on April 4.

“The demand for freshly cooked food has steadily increased, driven by the Covid-19 outbreaks, which have prompted Thai people to become more hygienic and health conscious,” Ms Preeyawan said.

“Five K-pop drama series are among the top 10 titles on Netflix, helping to promote Korean food culture. The spicy taste of Korean cuisine also attracts the appetite of Thai people.”

She said the company plans to add four new Korean dishes to Kudsan cafes in June.

Dak Galbi wants to increase the number of Kudsan cafes offering its dishes to 1,200 branches by the end of this year and 2,000 branches next year from 555, Ms Preeyawan said.

According to Ms. Kanokorn, there are 5,000 Kudsan cafes across the country, and the number is expected to increase to 6,700 by the end of this year.

Ms Preeyawan said the company plans to spend 100 million baht to open 10 Galbi X outlets, its Korean street food brand, in Bangkok this year, bringing the total to 13 branches by the end of the year. year.

The company also wants to open Dak Galbi Korean cuisine restaurants in the third and fourth quarters at The Mall department stores and Central shopping complexes, she said.

Under its plan, Dak Galbi expects sales to rise to 500 million baht from around 200 million last year.