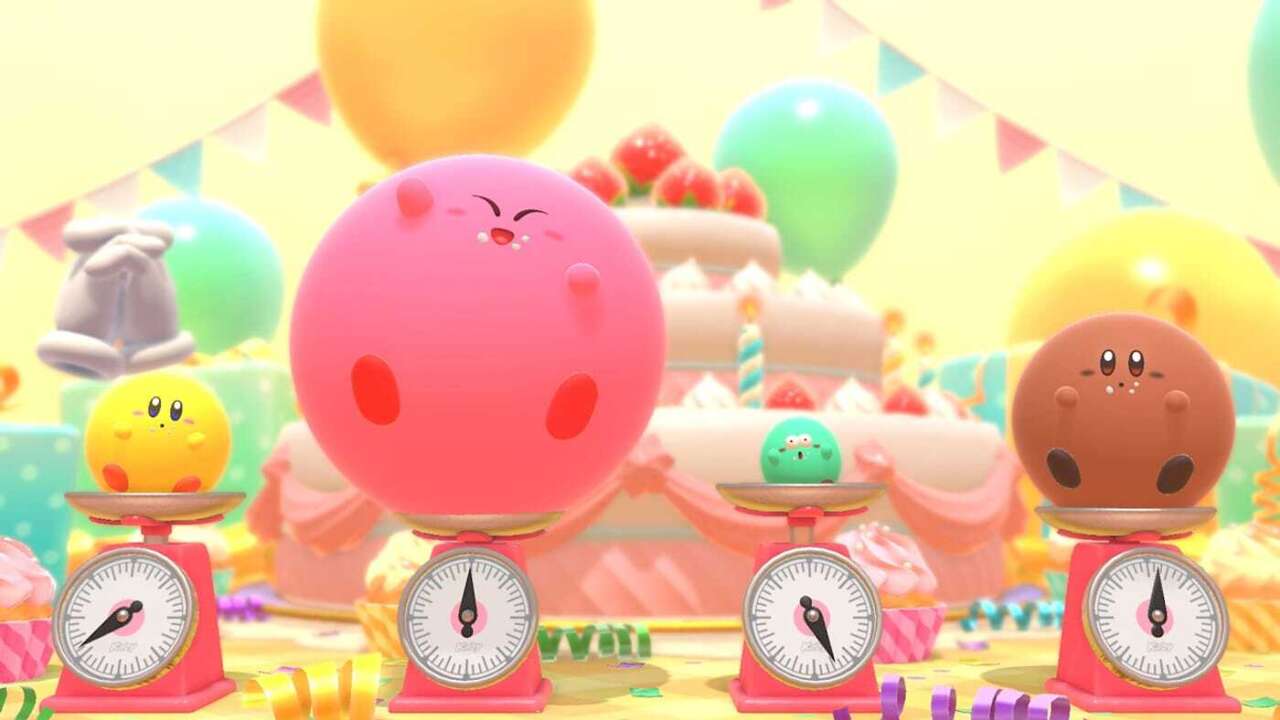 If there’s one thing Kirby is known for — besides being “friend-shaped” and lovable — it’s the little guy’s insatiable appetite. Kirby’s Dream Buffet focuses on this aspect, creating a game of downing delicious treats as fast as you can. While the title apparently draws inspiration from a variety of games including Fall Guys, Beautiful Katamari, and Mario Party, it manages to differentiate itself from the rest and feel quintessentially Kirby with its light, food-centric, and fun tone. However, for all its charms, Kirby’s Dream Buffet suffers from several issues, including a severe lack of content and incentives to continue playing. While riding like Kirby is enjoyable, the experience feels more like a light snack than a well-balanced meal.

Kirby’s Dream Buffet begins atop a table adorned with pastel-colored pastries and sweet treats. After rolling off your plate and onto the gingham-patterned tablecloth, you can browse through a variety of additional features or skip straight to one of the game’s three play modes: battle mode, online mode, or local play mode.

In Battle mode, you and up to one other player can grab CPUs for the chance to take the cake – literally. The online mode, meanwhile, pits you against players around the world through random matches or password-protected private games. However, if you and your friends are all in the same room, you can also do local play, allowing up to four separate consoles to play the game together.

Despite these differences, all of these modes consist of the same three events: races, mini-games, and battle royales. In a Grand Prix Gourmet – essentially the default way to play – two races, a mini-game, and a final showdown via battle royale are combined to form a cohesive experience, after which four Mario Party-esque prizes are handed out and a Kirby is crowned heavyweight king. However, whichever event you select, the way you play is essentially the same: you roll, collect fruit, and try to outwit or outlast your opponents.

During the competition, there are two things that can give you an advantage: picking up fruit and rolling over item boxes. While picking up fruit earns you the points you need to win the game, it also increases the size of your Kirby, allowing you to cover more ground when moving while giving you a bit more weight to throw around. when you clash with other players. Item boxes, on the other hand, will give you a consumable that you can use to move forward. These items take the form of different foods that you can use Kirby’s signature power absorb ability on. These include healthier snacks, such as hot peppers, which take you through the fiery course, as well as delicious donuts which allow Kirby to take the shape of a wheel.

All of these aspects combine to create a game that’s actually quite fun, in the moment. Although the controls are a little wonky, it feels like a deliberate choice and ultimately adds to the excitement of the games. Dream Buffet also manages to take a few great ideas from a few series – such as the random, game-changing rewards given out at the end of Mario Party – and combine them into something new. This feature in particular (along with the way each race ends with first-come, first-served strawberry dishes that can dramatically alter how many points you have) constantly gives players the opportunity to make a huge comeback. While this can be irritating for more competitive players, I found it kept the game light and fun.

Unfortunately, that’s about where my enthusiasm for Kirby Dream’s Buffet ends. While there are four difficulties you can set the processors to – mild, normal, hot, and very hot – none of them are particularly difficult. Worse still, the game tends to have connectivity issues during online matches, which means that even human opponents can’t fight properly. All of this coupled with the few differences between courses and mini-games means that Kirby’s Dream Buffet gets repetitive. very rapidly. For example, when I took the game out for family game night, each of us could play about two Food Grand Prix each before we were ready to move on to another, more engaging board game. It didn’t help that only two at a time could play the game locally, which feels like a missed opportunity.

As for what else you can do in Kirby’s Dream Buffet, the list isn’t long. Outside of the main events, you can enter Free Rolling mode (which acts as a sort of training ground), change your costume and color, and check out all the rewards you’ve earned. These rewards mostly consist of new costumes, which are pretty cute, but don’t do much to make up for the repetitive gameplay and entice you to keep playing. And that’s all. Not even an options menu is included in the game, which means if you need any kind of accommodation, you’re out of luck. While handling Kirby in ball form is meant to be a little tricky, the game doesn’t account for anyone who might need extra assistance, button remapping, or visual aids. It’s even more glaring when you see how small some of the text is in portable mode.

In short, a big part of what Kirby’s Dream Buffet relies on is its adorable aesthetic, which, to be fair, is where it shines. The pastel-colored paradise is filled with food that, while not as tempting as something from a Studio Ghibli movie, is a visual treat. There’s an exuberance that shines through as you play, which makes for a distinctly “Kirby” experience. Still in typical Kirby fashion, the music is delightful, made up of upbeat and somewhat jazzy melodies. However, for all its charms, it’s a little frustrating that each level has the exact same aesthetic. While it’s understandable that the game wants to keep its sweet and pleasing visuals, you can’t help but grow weary of every course offering just that, with no real change in color palette, unique songs, or any kind of gimmick that sets them apart. distinct. The result is something that seems uninspired.

In a world where most Nintendo games are $60, well, already, Kirby’s Dream Buffet’s $15 price point indicates a different thought process on Nintendo’s part. But when compared to free-to-play games like Fall Guys, even that lower-than-par price doesn’t match what’s on offer at Dream Buffet. While any expectation of a full-size Kirby game seems unreasonable given that the mainline series just got a new entry earlier this year, Kirby’s Dream Buffet feels incomplete and just doesn’t hit the mark.

How Jelly Could Translate To Mainstream Games