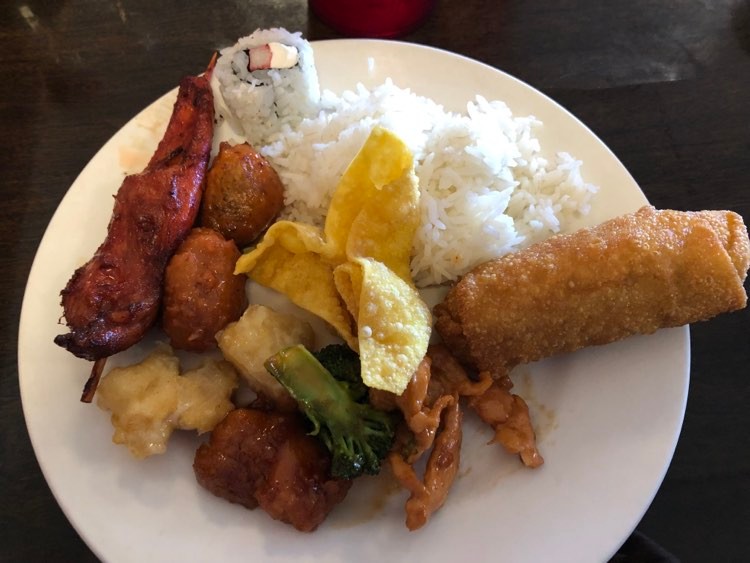 Go out for lunch with Tori: Golden Buffet

One of the perks of attending Midland High School in the early 2000s was the ability to get off campus for lunch.

Jumping into an upperclassman’s car, going through a drive-thru and splurging on fast food was considered a treat. At least twice a month my friends and I would just walk across the street to Eastlawn Plaza to buy some TCBY frozen yogurt or a sandwich from Subway – both long gone.

Another common sighting was when classmates walk into Golden Buffet and walk out with polystyrene containers. Since the schools are on spring break this week, I thought it would be safe to return to the Golden Buffet – I haven’t been there for a few years – for a buffet lunch of my own, accompanied by my parents. for the experience.

Golden Buffet, located at 979 S. Saginaw Road, is tucked away in the corner of a small collection of restaurants and shops, but is easily identified by its large sign out front. Inside, a host ushered my family into the dining room, took our drink orders, and allowed us to make our buffet lunch selections.

Attending a buffet meal of any kind is walking a thin line between delicious and disastrous. I tend to take a cautious approach, taking a few dishes that look appealing, deviating from labels and food appearance.

My mother, on the other hand, was a bit more adventurous, not looking at the ID cards above the glass and taking what just looked appealing. Fortunately, everything went well for both of us.

My dad is the most daring of us all, trying out a selection of spicy or unique dishes.

I ended up going with a collection of chicken dishes, along with rice, an egg roll, sushi and crab rangoon. When I eat Chinese I have a personal ritual, starting with the crab rangoon – which I consider an appetizer – rotating through the different dishes and ending with rice as a palate cleanser before having a cookie makeshift for dessert. To be fair, it wasn’t until I formulated this week’s column that I realized I had this habit.

Typically, when I have crab rangoon, the crispy wonton wafer is full of cream cheese with tiny crab dots. Golden Buffet’s interpretation mixed almost equal parts of crab with the cream cheese. With a generous drizzle of sweet and sour sauce, it was a great start to a meal.

The orange chicken spiced up my taste buds with breaded chicken covered in a tangy citrus concoction. The coconut chicken took me by surprise and quickly became a favorite. The breaded chicken pieces were coated in a white, sweet sauce that left a slight aftertaste.

The teriyaki chicken consisted of a piece of grilled chicken skewered on a long toothpick, drizzled with sauce. Although it didn’t taste like traditional teriyaki, it was well seasoned. I felt a little embarrassed eating this particular chicken, as it was too big to eat in one bite and I didn’t spot any knives on the buffet until my meal was well along. So instead I treated the teriyaki chicken like a rib, taking delicious bites. My parents didn’t scold me and I didn’t notice the other diners looking in my direction, so I went with it.

The chicken meatballs were a close second in my book. The consistency reminded me of a hushpuppy, just with meat. After further research, I realized that diners can drizzle them with sauces. While I had a plentiful supply of sweet and sour sauce on hand, Golden Buffet’s chicken meatballs didn’t need any additional flavoring.

I introduced a bit of green to my palate with the egg roll, which is mostly cabbage and other vegetables. Everything from the crispy wonton to the crispy content gave lunch a good crunch factor.

I completed the meal with a single crab and cream cheese sushi roll. Since I couldn’t find any labels for the half-dozen varieties of sushi at the Golden Buffet, I was less daring than I might have been, just going on sight to make my choice. Still, with a little soy sauce carefully administered to the roll, it was a good choice.

Golden Buffet offers a varied and tasty selection of Chinese cuisine – a great place for the undecided dinner party. Those visiting with family or friends have the added benefit of not only admiring other people’s choices, but also having the opportunity to try those same dishes in a second or third course. Cheers!