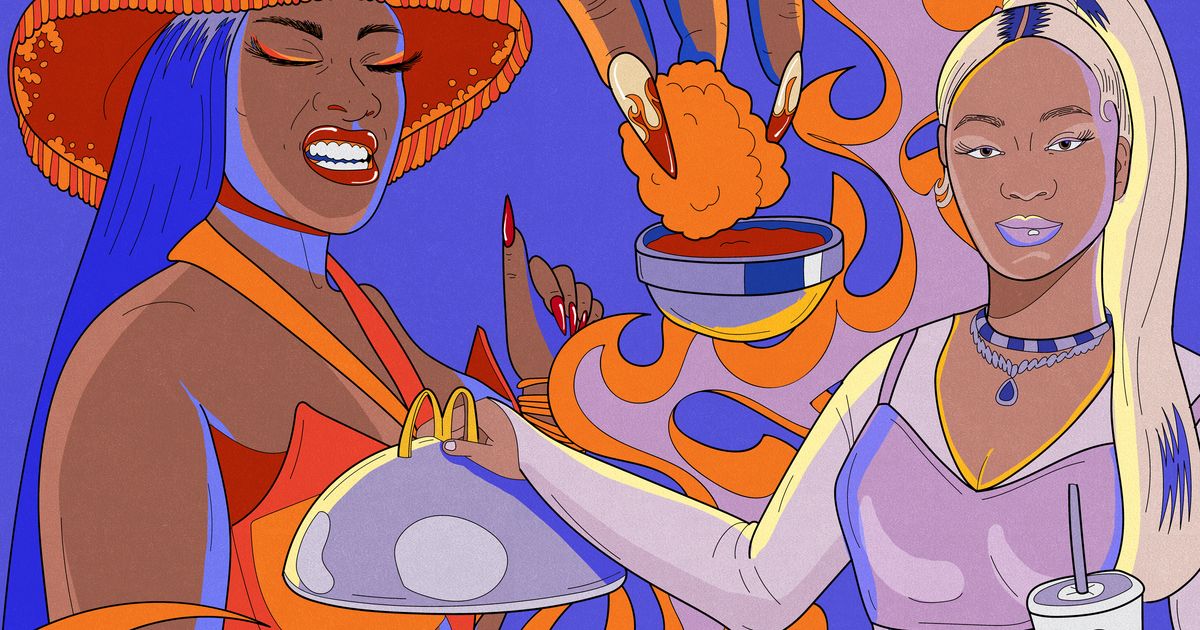 Megan Thee Stallion and Saweetie are just two stars who have recently put their cachet to good use in fast food marketing.
Illustration: Maria Contreras Aravena

The advertisement opens in a modern day Wild West. We are at Thee Stallion Saloon. A lone tumbleweed sweeps past the gleaming motorcycles and glittering neon signs outside. Honoring the saloon’s cinematic position as a place of camaraderie and conflict, the commercial follows a familiar storyline. Our hero – the saloon’s namesake – sits inside among his crew, a jeweled orange cowboy hat tipped over his face to create a momentary sense of mystery.

Suddenly, an African-American woman bursts into the bar, panicked. “Someone stole your Hottie sauce!” She pauses. “All.” Our hero instantly takes action. “Not my hottie sauce!” Megan Thee Stallion responds, rising from her seat, filled with purpose. She turns on the bike and off we go.

Pursuing the thief from Houston to New Orleans, Stallion’s semi-animated motorcycle chase ends in a revelation: The thief is none other than Megan’s icy alter ego, Tina Snow, whose plan is quickly thwarted. by the “real” Megan. To ensure the sauce is preserved, Megan hands it to a Popeyes chef. “Hottie sauce is here,” she announces under a Popeyes sign as orange as her hat, sticking out her tongue with a final signature “ahh!”

The Hottie Spicy-Sweet Sauce, inspired by the Hot Girl herself and meant to be eaten on just about anything, is a dynamic addition to a long line of fast food marketing tactics that have focused on black musicians. The ‘Popeyes x Megan Thee Stallion’ collaboration is new territory for the star and the restaurant chain, although it was recently preceded by a number of high-profile partnerships: Appointment of Lil Nas X as “Chief Impact Officer” of Taco Bell, Nelly’s agreement with Burger King, and McDonald’s meals from Saweetie and Travis Scott (more than a year before the tragedy of Astroworld), as well as the collaboration announced this week with Mariah carey.

Megan’s campaign differs in several important ways, however. On the one hand, this includes not only food, but also merchandise like sweatshirts, graphic t-shirts and tumblers. (With a new drop announced this week.) And what is perhaps most distinctive about this partnership is that it positions the rapper as more than just a spokesperson, promoting Megan’s involvement as a business partner and future franchisee of Popeyes. In doing so, it raises new questions about the decades-long pursuit of black membership by celebrity, consumer and fast food businesses.

In his book Franchise: Les Arches d’Or in Black AmericaGeorgetown author and professor Marcia Chatelain explains that in the late 1960s, social unrest – especially the riots and protests that followed the assassination of Martin Luther King Jr. – did not result in a greater social upheaval (the gender of which could have been racism or poverty), but rather to the intervention of companies in matters of civil rights. Companies like McDonald’s began to approach and attract black communities, promoting their restaurants as sites for employment, ownership and economic advancement. Coinciding with Nixon’s “black capitalism” initiatives – which favor economic incentives over real justice – Black communities were uniquely prepared to make the fast food franchise a dream of freedom. The catch, of course, was that the franchise model requires quite a bit of capital to get the dream off the ground. And as history shows, regardless of the capital, fame is sure to follow.

The early forefront of fast food franchises with black celebrities were Mahalia Jackson’s Glorified Chicken and James Brown’s Gold Platter chain. Both came and left in the late 1960s and 1970s, and attempted to leverage the influence and wealth of a well-respected star as a buttress against the economic peril plaguing the industry. catering. Although both companies have been largely forgotten, their legacy remains, as short-lived businesses helped establish the role black celebrities in particular would be called upon to play in the fast food industry: purveyors of culture. black women who lend what Chatelain calls “authentic soul” to otherwise soulless products sold by fast food companies.

While Popeyes – who debuted, unsuccessfully, in 1972 as Chicken on the Run before being renamed to the character Gene Hackman in The French connection – never partnered with an official celebrity spokesperson, he enjoyed a level of popularity among celebrities. In a 2003 interview on The Oprah Winfrey Show, for example, Beyoncé sprang from her love for the chicken chain. “I really like Popeyes… At one point, everywhere I went, people bought me Popeyes, like fans! Explained the Houston-born superstar. “Peyes heard, so they gave me a lifetime subscription.”

Aside from Beyoncé, celebrity mentions haven’t been the franchise’s primary marketing tool. In recent years, Popeyes has instead relied on a fictional character – a middle-aged southern black woman named Annie, who, since her introduction in 2009, has been played by American Bajan actress Deidrie Henry – to make its commercial offers. Annie, in the words of former Popeyes Global Brand Director Dick Lynch, “could be anyone. She could be your mom, your grandmother, a chef, maybe even a cashier, or the CEO of Popeyes. It might be, but the story of black women and chicken is not that simple.

In the book Building houses with chicken thighs, Psyche Williams-Forson formulates a counter-history of the “chicken ladies”, women who discovered, over several centuries, that cooking, frying and selling chicken was a source of “freedom and economic independence ”. “As Williams-Forson argues, these black women were dealing with chicken, a food often mired in anti-black stories and images, as a “tool for self-expression, self-realization, resistance, even accommodation and power”. Unlike the fictional Annie de Popeyes, which is linked to her business founder, The Real Women of Building houses with chicken thighs have to deal with these complex stories of gender, food, race and power with each of the meals they prepare.

With Annie, Popeyes established his image and his Black sound. Over time, the franchise also gained attention for the “blackening” of its marketing voice, and after the successful launch of a new chicken sandwich in 2019, Chatelain wrote to Washington To post that “Part of Popeyes’ success in making the chicken sandwich ‘cool’ was the company’s Twitter account and its reliance on the African American vernacular and slang to describe the sandwich and attack competitors. In the wake of this speech, the Megan Thee Stallion promotion emerges as the product of a marketing formula that remains committed to consuming Blackness to promote consumption. But how do you reconcile the continued commodification of this southern black women’s society with Megan’s own brand?

As a southern black woman whose phrase “hotness” connects positive ideas about pleasure, ambition, bravado and abundance, Megan Thee Stallion is a master of self-narrative and creation. slogans on social networks. Her coin “Hot Girl Summer” – the slogan became a hit song which earned the rapper his first number 1 on Billboard’s Rhythmic Songs chart – was largely co-opted by a number of brands, including fast food companies like Wendy’s, without any involvement from Megan. In pop music, a character like Megan Thee Stallion is, of course, a product in itself, designed to be both ambitious and authentic, unattainable yet accessible. Megan’s tale emphasizes self-mastery and control over her body, mind, and music, but companies will quickly exploit as much as they can of any popular image to make it their own. its cultural capital.

So is Megan’s official involvement with Popeyes a correction to that exploitation and a victory for empowerment? There is no simple answer. But given the growing dependence of the American fast food industry on blacks and a “Its black”, The partnership recalls a story that links Blackness and commodity. We cannot forget the fundamental ingredients that make up the nation-state: slavery, settler colonialism and capitalism. When and where we eat, we enter into a political process – much of which is intentionally obscured by these companies – that connects us to restaurant and farm workers, as well as the executives who organize and control food decisions. of their customers.

Fast food advertisers have found recent success by combining a culinary culture which values ​​the familiar and expedites it with society’s appetite for cultural consumption of hypervisible darkness. Megan Thee Stallion isn’t Annie, of course, but her role as Popeyes’ new spokesperson still forces us to grapple with the issue of the fungibility of black women within the channel’s marketing. And as Megan stars as the southern black woman in Popeyes’ new commercials, her youth, glamor, and notoriety ultimately promise a remix, not a revolution, on the company’s traditional advertising. Unfortunately for me, there isn’t enough Hottie Sauce in the world to cover up the bad taste that this brand heritage leaves behind.