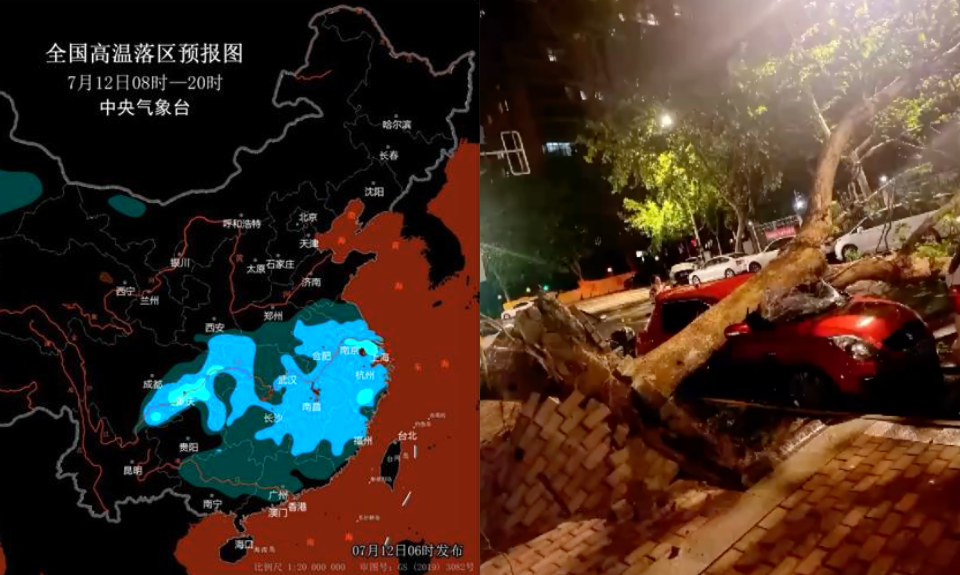 High temperature warnings from meteorological authorities turned ‘red’ this morning, with parts of eastern and central China, including Nanjing, expecting over 40 degrees Celsius, while a recent storm massive also caused damage in several parts of our city.

Yesterday, July 11, our own province of Jiangsu issued a total of 39 high temperature warnings, involving 10 prefectural-level cities and counties, many of which were coded orange. Only the cities of Huai’an, Lianyungang and Xuzhou escaped code orange.

Then this morning, July 12, that forecast was upped, as 37-39 degrees were predicted for today across most of eastern China, including Nanjing, reports The Paper.

Forecasts of over 40 degrees were also coming for Shanghai Municipality and parts of southern Zhejiang Province, southeastern Sichuan Province and northern Chongqing Municipality.

Going a step further, many parts of Nanjing then joined the red alert club, where temperatures north of 40 degrees were expected, the Yangtze Evening News reported this morning.

However, that wouldn’t have been much help on Sunday night as Nanjing was hit by a severe thunderstorm causing major disruption and property damage.

High winds, driving rain and forked lightning were then seen in the city’s downtown area. Road signs were toppled and many Wutong trees uprooted, collapsing and crushing cars parked nearby.

Wind forces on the road and railway bridge decks at Dashengguan over the Yangtze River reached GF8. As such, road traffic has been restricted and services on some sections of the Nanjing Metro Line S3 have been temporarily suspended, while trains on Line 1 have been delayed due to high winds that blew debris in its tracks.

Elsewhere, a sculpture in Nanjing was decapitated during the storm. Residents near Yueya Lake Park in Qinhuai District woke up on Monday to find the delicate bronze sculpture of Qinglong atop a concrete pillar was missing. The park management office told Purple Cow News it was the first time the sculpture had been damaged in 24 years.

Finally, the orange warning signal for thunderstorms and gales issued by the Nanjing Meteorological Observatory was lifted at 11:37 p.m. Sunday.

What is the historical definition of “buffet” in Arizona?

Beef n’ Brand is proud of its Sunday brunch buffet