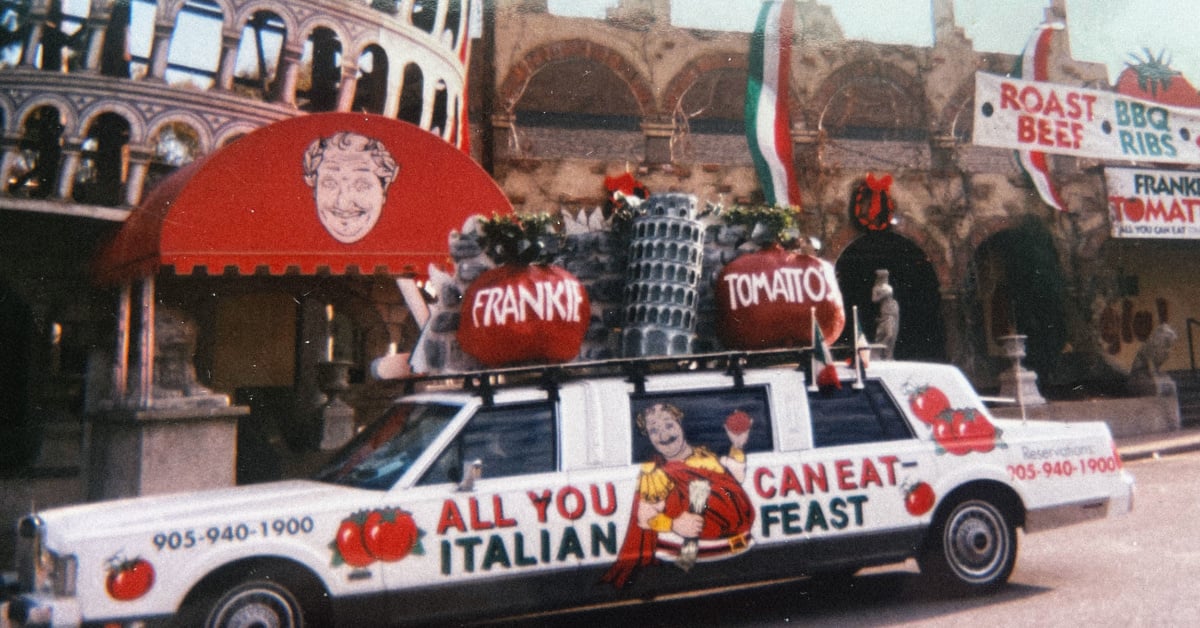 When I was growing up, there was only one restaurant my family went to for a party: Frankie Tomatto’s.

For the uninitiated, Frankie’s was an all-you-can-eat Italian buffet, located in Markham and topped with a 55-foot replica of the Leaning Tower of Pisa. It was the brainchild of Hal Roback, who imprinted the Olive Garden kitchen and aesthetic on the Mandarin business model. Frankie’s opened in 1994 and served more than 11 million meals before closing in 2020, one of the first casualties of the pandemic. The tower remained standing thereafter, a reminder of the restaurant’s glory days, until the beginning of the month, when it was demolished– causing many loyal customers like me to feel the loss again and reflect on the legacy. 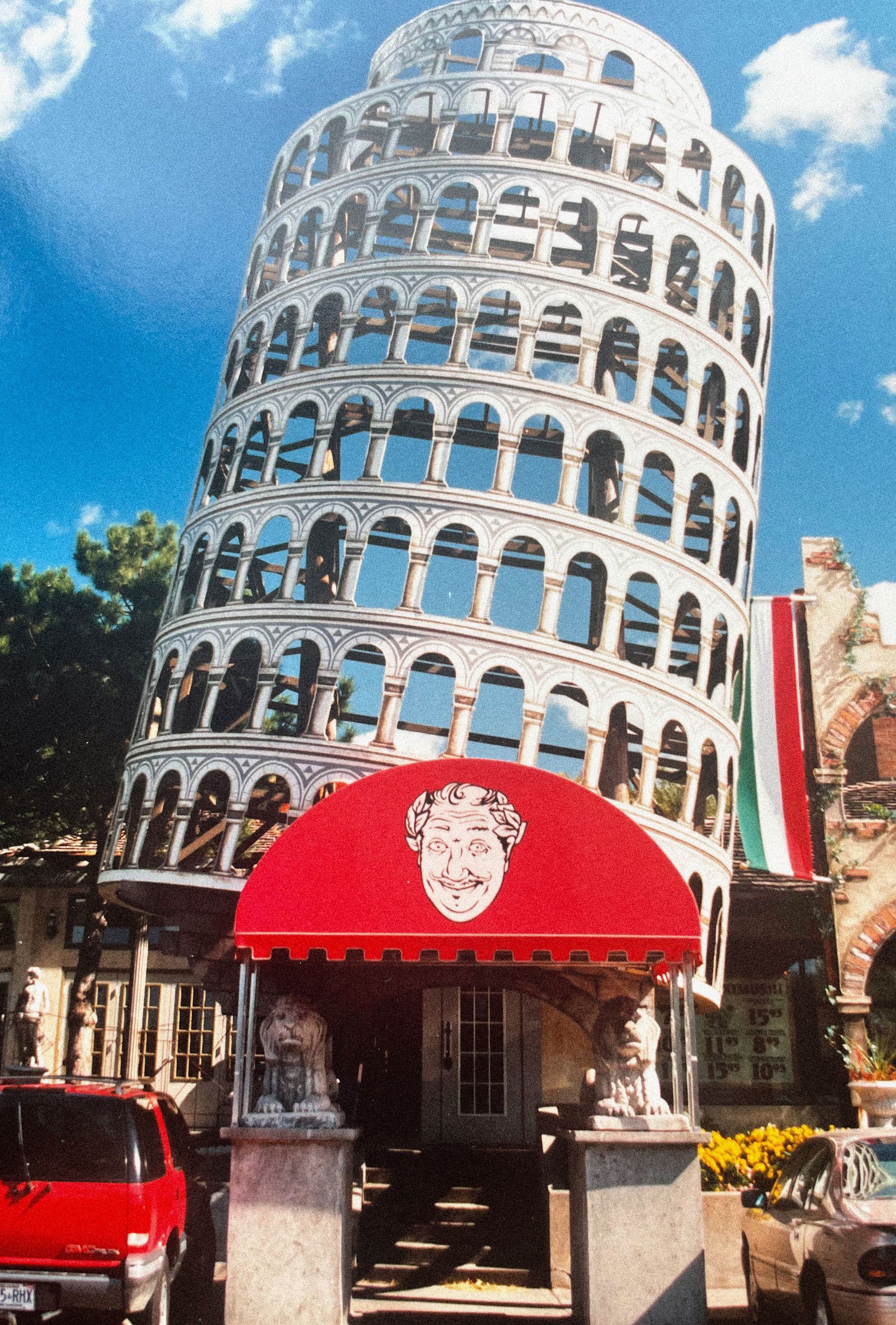 Unsurprisingly, the interior of the restaurant was also a lot, with a dining room set up to look like an Italian villa, with faux cobblestone floors, warm tables decorated to look like storefronts, and trompe-l’oeil wallpaper that mimicked the crumbling walls of ancient ruins . At one point, a fully functional indoor water fountain formed the centerpiece of the supposed villa’s faux piazza – Toronto’s own Trevi Fountain. In short, Frankie’s was completely cheesy but full of charm.

My family was just one of the tens of thousands that Frankie served. And we were faithful faithful. We have visited for every birthday, anniversary, end of school year party and even Christmas. Frankie’s was never empty. Being there, especially during dinner service on weekends, was wonderfully chaotic: the chatter of families conversing in Mandarin, Hindi, or Farsi; a recording of an Italian lesson looped in the toilet; the screaming, grumpy pre-recorded birthday song (“It’s a Frankie birthday!”) – which never failed to induce scares every time it came out of nowhere – and hordes of people circling the salad bar, waiting for it to be replenished with baby spinach and cherry tomatoes. 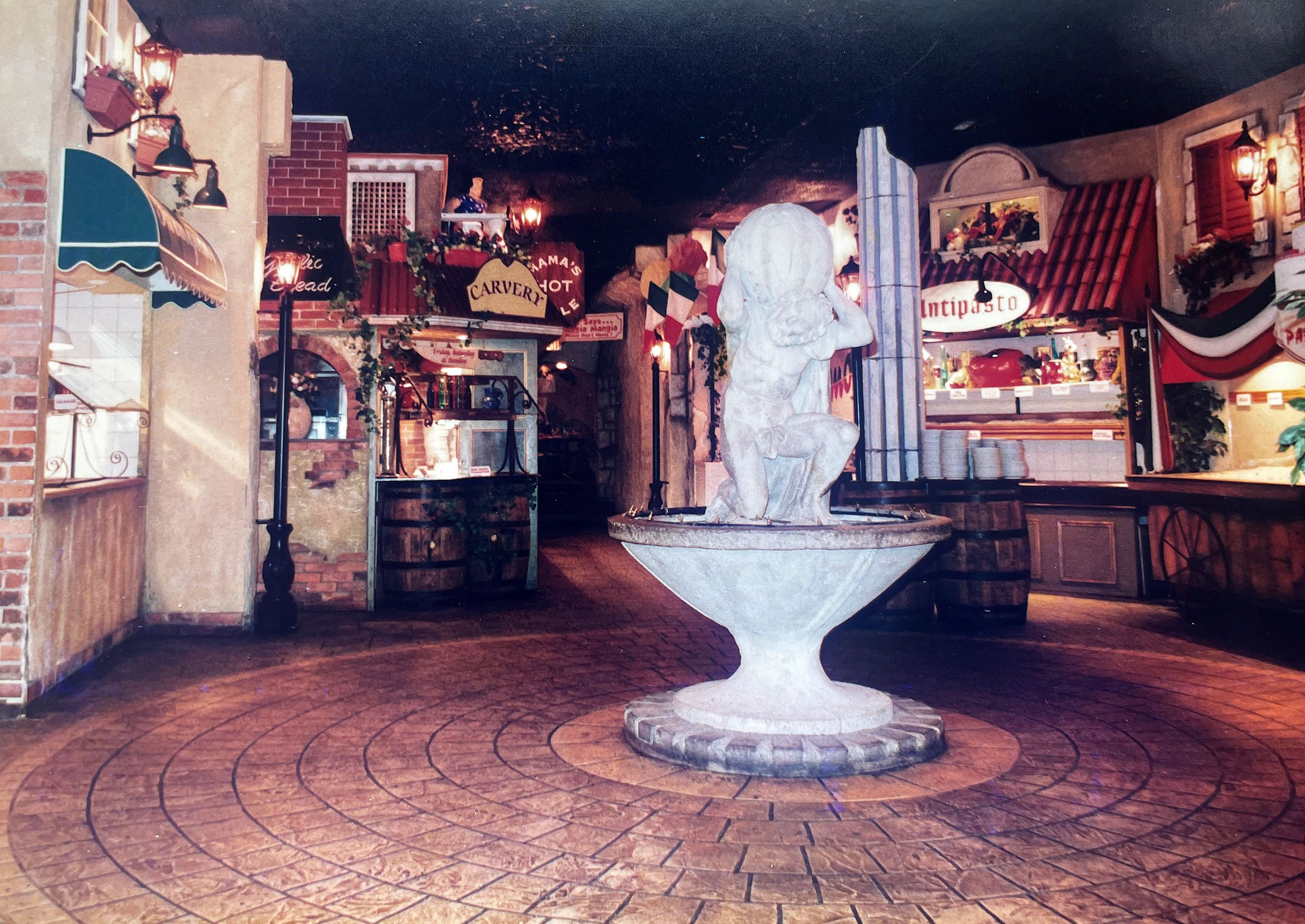 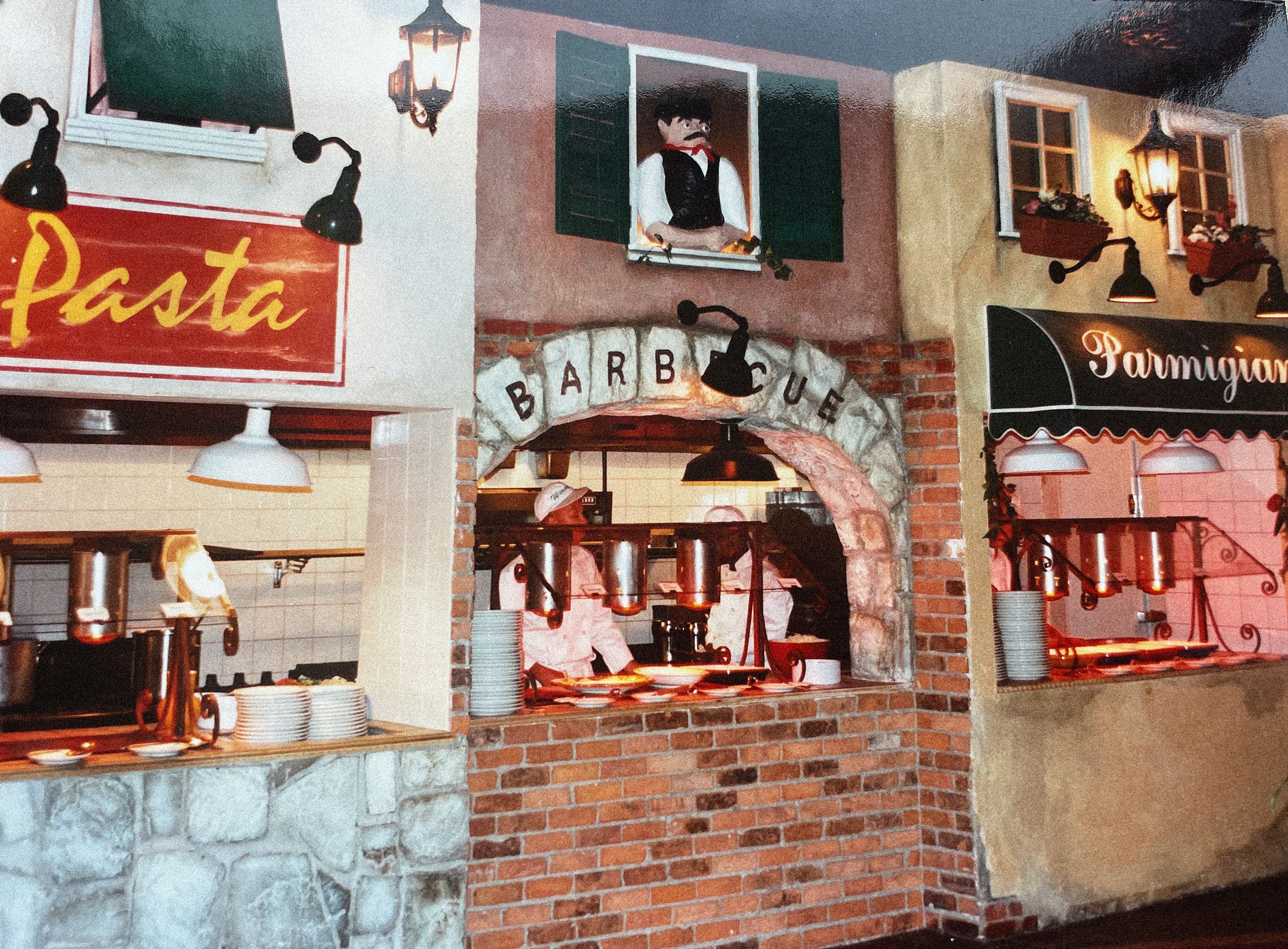 The food at Frankie’s was the best food ever – or at least that’s how I remember it. Pizza, dessert towers, bubbling stews and endless rivers of sauce, ready to be ladled onto plates of my favorite pasta (penne). And, while this may all seem pretty basic to some people, my family, who immigrated to Canada from China in 1999, never ate this kind of food at home. This meant I associated the garlic bread and chicken alfredo with special occasions. My parents were looking forward to the giant ham and the braise, dishes so different from what they cooked at home. As working class immigrants with three kids to feed, they loved being able to let us loose on a buffet where we could eat as much as we wanted without affecting the bill. All-you-can-eat restaurants are popular because they symbolize decadence and allow for overconsumption among families not used to indulging. 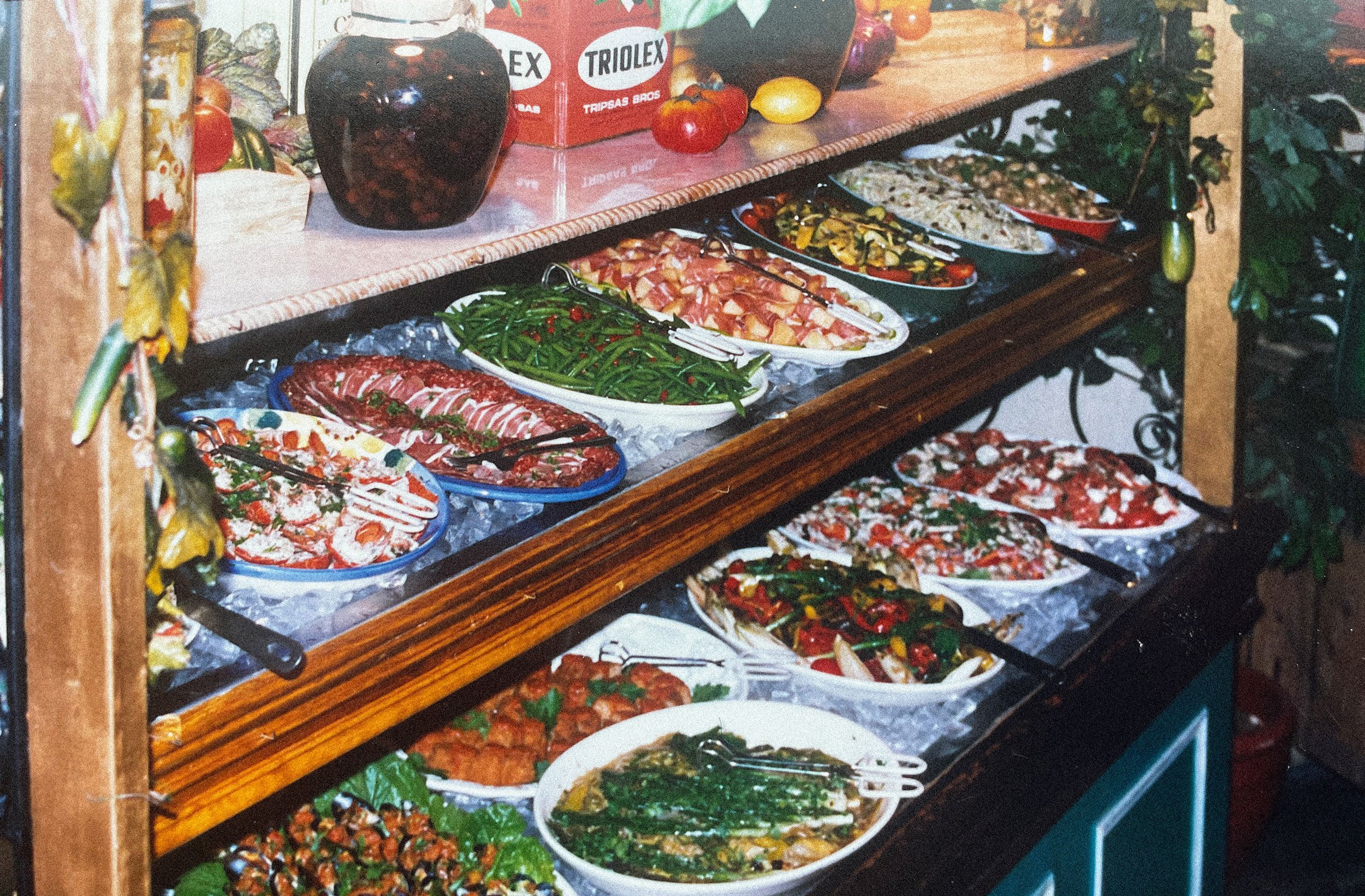 Most of Frankie’s clientele were immigrants like us, who had also come to celebrate milestones. Over the years, I noticed new options at the hot tables: contenders for halal beef and vegetarian meat began to appear on the warmers, reflecting the diversity of the restaurant’s diners. “At an all-you-can-eat buffet like Frankie’s, you didn’t have to speak English,” says Roback. “You didn’t need a menu, you didn’t need to communicate with the waiters. It really worked in the GTA.

When Frankie closed, I was just one of many heartbroken regulars. (In fact, on the restaurant’s now inactive Instagram account, people are still commenting on the farewell post, begging for reopening.) On August 29, 2020, as a final thank you to their customers, the Frankie’s team gave out free drive-thru pizzas – because Covid – only accepting donations for Easter stamps. Roback says they gave out 1,100 pizzas that day, and some recipients told him they stood in line for more than three hours to say goodbye. “I couldn’t believe the number of people driving up and taking pictures. It was unreal. 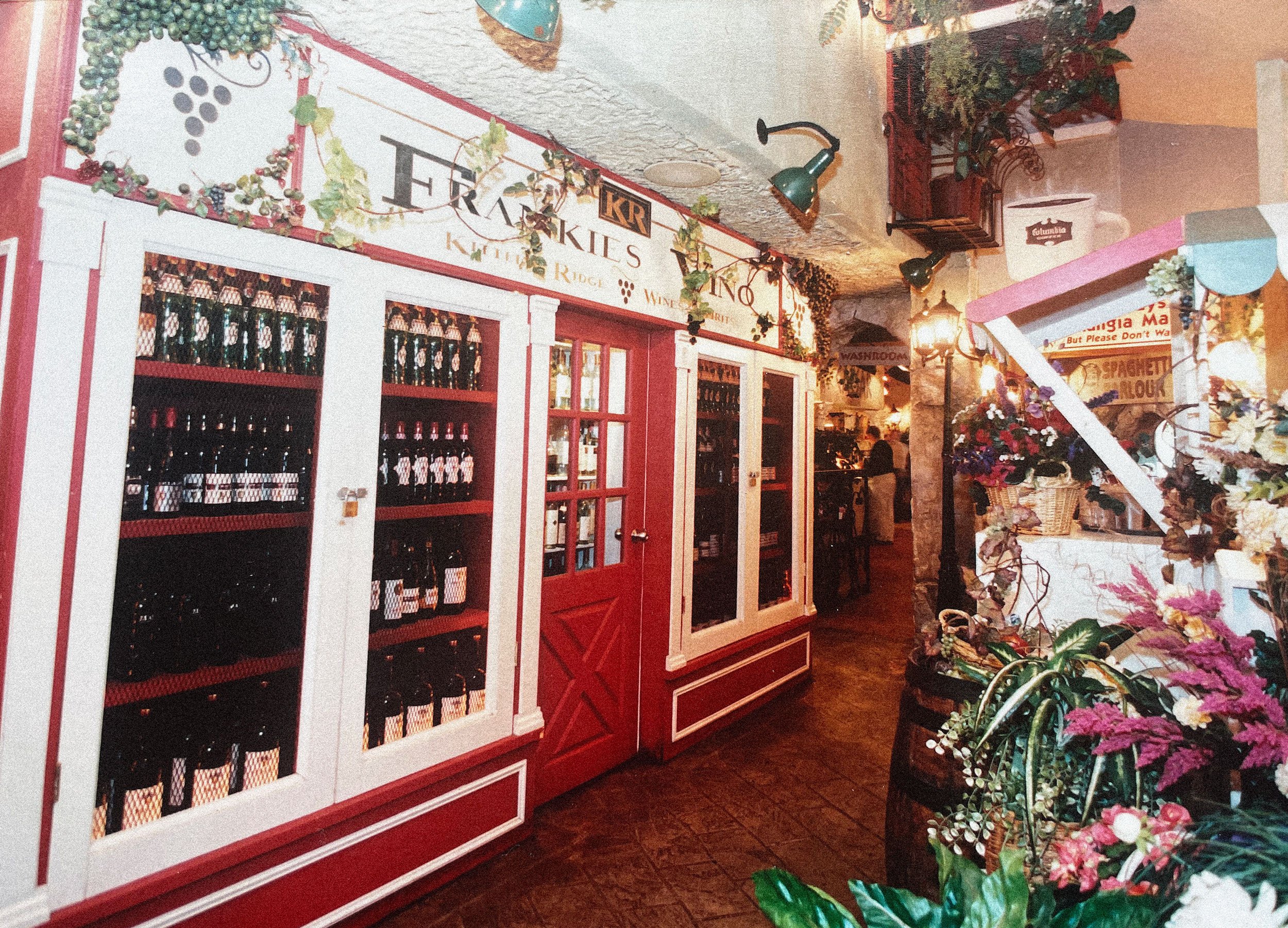 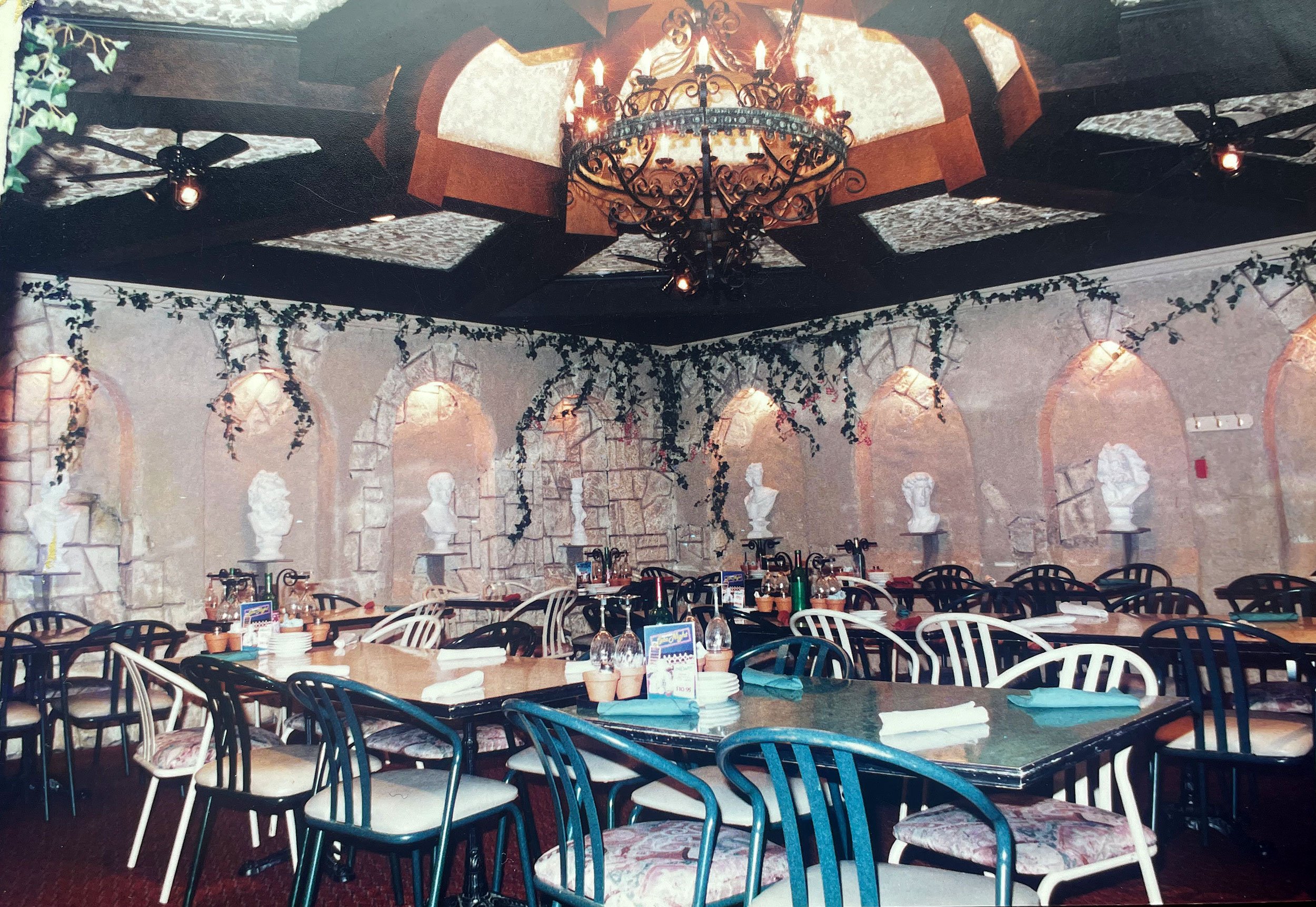 Frankie’s closure is part of a larger trend: the death of the buffet. When the pandemic hit and public health measures dictated an end to dine-in, it was harder for hot-table self-service restaurants like Frankie’s to switch to take-out. Even when indoor dining returned, getting up and walking around a restaurant was a no-no, and approaching a hot table and hand-picking the perfect slice of pizza was out of the question. “We tried to reinvent Frankie’s,” says Roback. “But, to be honest, we couldn’t.”

The business model of Frankie’s and so many other buffet restaurants was dysfunctional even before the pandemic, and then gutted by the closures. It costs a lot to stock a sideboard. And the labor costs to staff a place as large as Frankie’s, which had 425 starving people, were astronomical – according to Roback, Frankie’s had 154 employees when it closed. But raising the prices would have hurt the sense of bargain that was integral to the buffet’s success. “Until closing, you could have an all-you-can-eat lunch at Frankie’s for the price of a burger,” says Roback. “I just don’t see that same pricing pattern happening in our current economic situation.”

With Frankie gone, the surrounding neighborhood is a sea of ​​malls, gas stations, warehouses, and highways. While the neighborhood has become livelier in recent years, with dim sum parlors and Indian eateries popping up in this part of the GTA once dominated by Tim Hortons, nothing seems to have filled the hole in shape. of tomato left by Frankie. As great as these new places are, they aren’t the kitschy, weird, cheap eateries you frequent when you need to feed a birthday party of 15 growing tweens.

Communities across Canada have a Frankie’s, they just go by different names. When I tell my friends who have never been to Frankie’s about the fever dream eating there, I always learn of another such place in another part of the country – another absurdly decorated and overdone buffet which was the go-to for family celebrations. When we lose places like Frankie’s, we don’t just lose restaurants, we lose community gathering spaces. Frankie’s was magical because of the unique combination of affordability and deliciousness, the bonkers aesthetic, the diverse group of diners, the hands-on experience. For 25 years, Frankie’s has been an important part of my family’s life.

In 2019 we celebrated my younger sister’s 17th birthday at Frankie’s. As the host led us to our table, we passed another family also celebrating a birthday. The staff played along to this agonizing song, inviting everyone in the dining room to sing along. The birthday boy was mortified by the attention but endured it like a champ, even posing for a photo with a crown and a cardboard cutout of Frankie, the restaurant’s mascot, a Roman Emperor figure wielding a handful of dry spaghetti. We laughed, teasing my sister that it would be her turn soon. Then we sat down to enjoy what would be our last Frankie feast – we just didn’t know that at the time.