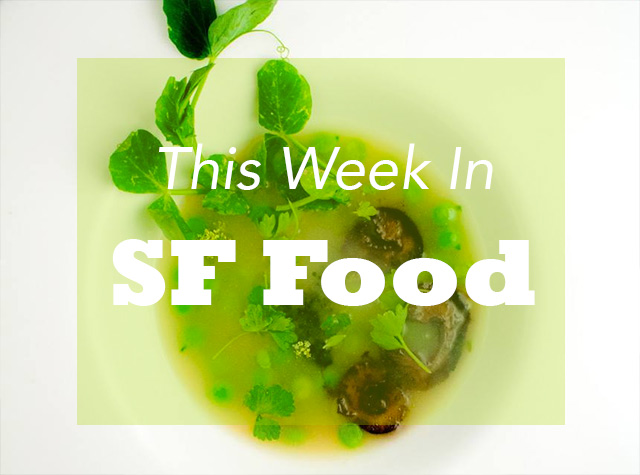 Topping the headlines of the dining scene this week is the imminent opening of sloth bear, the traditional restaurant of underground chef David Barzelay — the name is an anagram of his surname. Barzelay will offer a tasting menu format ($120/person for 12-18 courses) with communal seating at two 22-foot-long tables in the former Hi-Lo BBQ area. And as Inside Scoop reported earlier, Lazy Bear will adopt the same ticketing system used by Coi and Alinea in Chicago. The opening of the restaurant is now scheduled for September 25 and tickets for the first tables will go on sale next Friday, September 19 at noon. [Inside Scoop]

There is also great news regarding the reopening of Northern Coffee in late fall, the biggest news being that it won’t really be a concert hall anymore. As we learned earlier this year, du Nord is getting a facelift at the hands of the Flour + Water team (Ne Timeas Restaurant Group) and the guys at Trick Dog (Les Bon Vivants), with a brand new menu, a cocktail program and hearty renovation. But what we didn’t know is that the space will be divided into a bar area (where the bar has always been), comprising 20 bar tables, and a main dining area where the stage space used to be, with 40 tables. So: no more rock shows, but expect the occasional “impromptu intimate entertainment act” and “unannounced sets by well-known musicians” during dinner. The menu is described as an “accessible bar menu” with a burger, salt cod croquettes and more. [Eater]

Downtown will get another brewery, after what looks like two consecutive years of brewery/tap room boom (with places like Hopwater Distribution, Mikkeller Bar, The Beer Hall and Schroeder’s all recently opened/re-opened). It’s called bullshit, and it’s a project by Paula Thompson and Zeki’s Bar owner Nick Rothman that goes into the former Persimmon space at 582 Sutter Street. There will be a menu of beer-friendly dishes with homemade sausages and pretzels, and beers will be made by local beer sommelier Rich Higgins. They are aiming for a fall opening. [Eater]

Heading to Divisadero later this year is Brenda’s Meat and Three (919 Divisadero in McAllister), a new expansion project from Brenda Buenviaje, chef and owner of Brenda’s French Soul Food, and her partner Libby Truesdell. The name refers to your menu options, which will be Southern-style (not just New Orleans), with your choice of meat (including fried chicken, “town ham steak”, tail of beef, etc.) and three sides (including bacon fat fries, smothered green beans, macaroni and cheese and cream biscuits). Brenda is aiming for a mid-November opening and is still working on a Fillmore project, Brenda’s Original Po’Boyswhich is still on the way in 2015. [Tablehopper]

In other news, Detroit closed on the fourth floor of the Westfield Center after eight years of operation. No word on who might take up this space. [Inside Scoop]

Just like the Chinese spot in the Nob Hill district U Lee after nearly 30 years. [Inside Scoop]

And Michael Bauer shared his thoughts on the recent opening Mr Benjamin in Hayes Valley, calling it “full of promise” and awarding it three grand. [Chron]