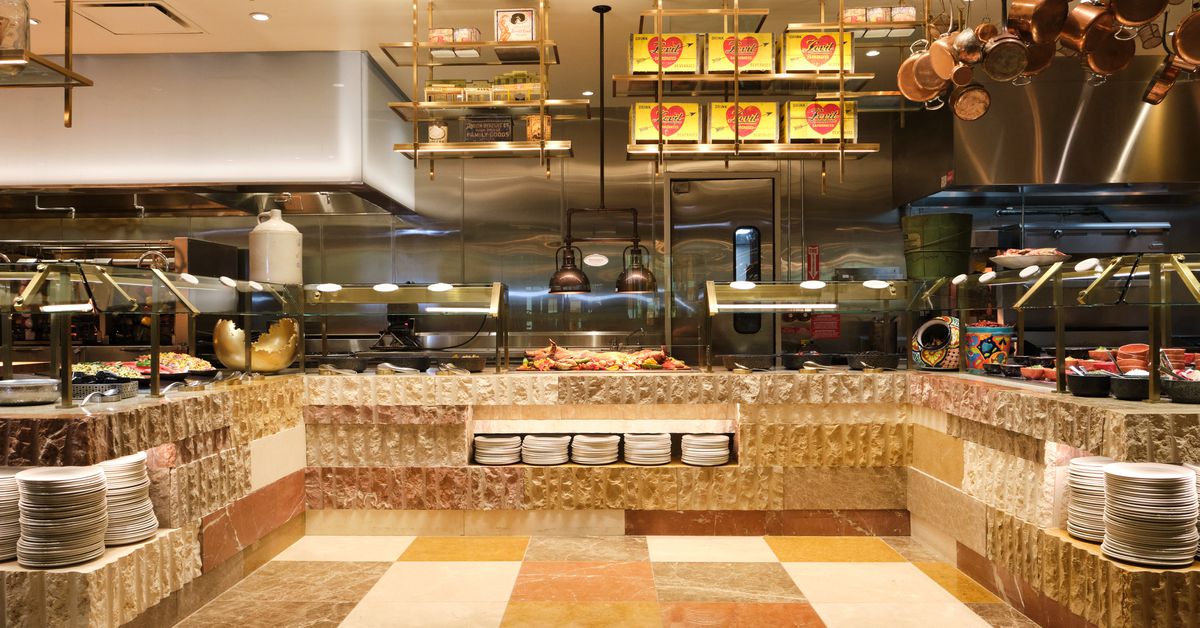 Bacchanal Buffet is back, better than ever with traveling carts, mixed dishes and 30 new menu items

If ever there was any doubt about the return of the Bacchanal Buffet, Caesars Palace has pulled out all the stops to bring back the biggest buffet in Las Vegas, and better than ever. The 25,000-square-foot, 600-seat Bacchanal Buffet has reopened with throngs waiting to explore the nine open, interactive kitchens, with many dishes already prepared individually, shared or plated in real time by the staff behind the counters.

The buffet, the largest in Las Vegas, underwent a $2.4 million makeover after it closed last year in March when the state ordered non-essential businesses to close to slow the spread of COVID -19. Clark County allowed self-service buffets to reopen on May 1, with restaurants allowed to have 80% capacity and three feet of social distancing. Bacchanal remodeled a section of the food line, focusing on a 2,120 square foot area of ​​the buffet. The changes replaced existing food counters, serving equipment, and ceiling and floor finishes. Designer Tetsuo Aoyagi, now of MUKU Design Studio Inc. in Tokyo, was the original designer of the $17 million sideboard in 2012 which features natural textures and materials such as glass and stone to give the impression of caves ice, mountains, etc.

Sixty-five people have returned to work since the buffet that normally runs from breakfast to dinner seven days a week is sticking to a limited dinner service for now.

I feel like I can say with certainty that this is the best buffet in the entire world.

But if stacking excess plates is what customers want, they’ll find it anyway. “We wanted to preserve that experience of the generous excess of what a buffet is and be able to come back to your table with a full plate,” says Murphy while pointing out everything new.

Before the pandemic, the buffet featured a rotating list of 30 chef choices, but now Murphy says only the new traveling carts will change as the buffet reintroduces itself to Vegas tourists with 100 new dishes. “We have a catalog of recipes that we introduce over time, but we just want to execute a really good product,” she says.

In the back, the Chinese menu has been revamped with Korean food on the side – kalbi ribs, japchae and banchan. Thai, Vietnamese, Laotian and Filipino cuisine, including adobo, is represented as well as a revamped sushi area.

The buffet now offers more than 100 gluten-free, vegan and vegetarian dishes, listed on signs above the dishes. Customers can scan a QR code and find out where to find each of these dishes along the line. A hearts of palm roll is a game on a lobster roll, while early diners loved the tomato tartare and coconut carrot gazpacho. “You can actually eat very healthy here if you want. Not that that’s what people want. Why would you? But you could. It’s an option,” Murphy says.

A new mezze station stretches from baba ganoush to lebneh, and alongside, virgin sangrias. Roman style pizzas replaced the New York style the buffet served. The buffet has changed from Italian dishes to more Mediterranean flavors – shakshuka, gyros, polenta. “We mixed it up a bit so it wasn’t just lasagna, red sauce, and chicken parmesan,” Murphys says.

The Latin section no longer has tacos per minute, replacing elote in four varieties with Takis and Flamin’ Hot Cheetos. Instead, street tacos are now mixed dishes waiting for diners on plates.

The front of the buffet brings the heavyweights – three carving stations with a whole suckling pig, prime rib and ceviche. A new Argentinian revolving grill fueled with white oak smokes the meats. A novelty, cherry quail grilled with chipotle, is displayed on skewers alongside barbecue duck wings and quail grilled over a wood fire, for example.

Sea scallops, hot and cold oysters, shrimp cocktail, lobster claws and hot and cold crab legs slip alongside mixed dishes such as grilled turmeric octopus with XO sauce, salmon on cedar plank, corn chowder sweetened with crab and prawns and oatmeal with lemongrass, ginger and polenta flavored with Thai curry. On a typical night, the buffet goes through 12 prime ribs and 400 to 500 pounds of crab legs.

At the dessert station, individual cupcakes in flavors such as salted caramel or ube nestle next to candied apples. All-natural gelatos with roasted banana dulce de leche or Belgian chocolate fill one side of the square station in the center of the buffet. The creperie station remains for desserts ordered on the fly. Asian flavors such as green tea, mango sticky rice, and Vietnamese coffee appeal to the Asian tourist that Caesars Palace sees at the resort.

Also new are tableside presentations of wagyu hot dogs and lobster bisque served from rolling carts that roam the buffet.

The buffet now takes reservations at OpenTable instead of meandering lines of hungry diners queuing to wait their turn to overload the plates with steamed crab legs, prime rib and Roman pizza. Bookings have already sold out for the next two weeks, with guests who hadn’t planned ahead begging to find a way to snag a spot during their short stays. “I made the mistake of going out the front earlier in the day and got blasted by 20 people,” Murphy said.

“We had time, we had 14 months to rethink the buffet and find new ways to serve this food. And I think we’ve accomplished that with the traveling carts and the new elements that you see in new gear,” Murphy says. “I feel like I can say with certainty that this is the best buffet in the whole world.”