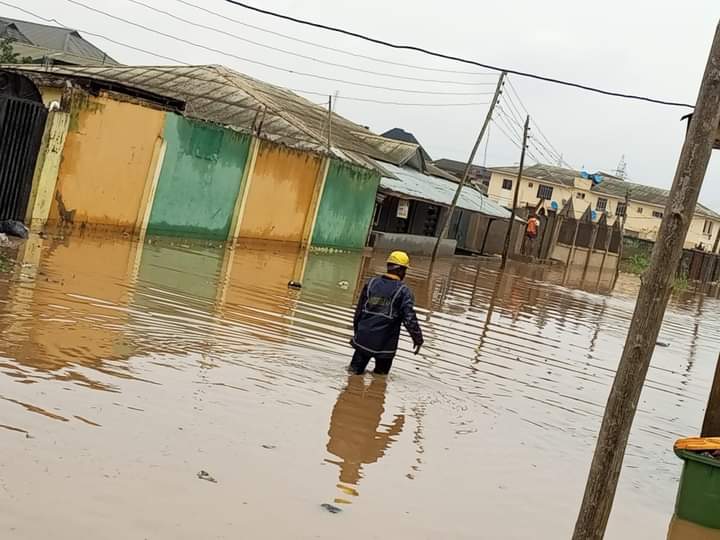 Your eyes are instantly arrested by the unusual volume of the Benue River as you head towards Makurdi from the Daudu/Agan abutments of the Benue State capital on this quiet afternoon. You pass the approach bridge and see to your left the “Makurdi Golf Course”, hitherto sitting near the picturesque lips of the river. He is soaked, sadly now, flooded and overwhelmed by the overabundance of liquid blessings. In front of you is the eye-catching artwork of a huge basket containing a variety of agricultural produce, a testament to Benue State’s pride of place as the epicenter of food production in the country. The image sits strategically at the intersection that leads to the southeast and south-south stretches of the country. The scourge of floods, you guessed it, was the reason your host, Samuel Ioraer Ortom, the state governor, barely savored the nation’s 62nd independence anniversary two days later.

He started his day this Saturday, October 1, 2022 by attending the interfaith church service commemorating the national monument. The event took place at All Nations Evangelism Ministries in Makurdi, the state capital and Ortom had taken the first reading from the Bible. He was also invited to make a few remarks before the closing prayers and benediction. Those expecting him to return to Government House, Makurdi, to entertain guests in the spirit of the occasion, however, were disappointed. He practically commandeered Benue State Emergency Management Agency (BESEMA) officials to take him to visit the sections of the state capital that were affected by the overflowing water. Development had precipitated the displacement of its people in places and the destruction of their agricultural lands and by extension their livelihoods.

Ortom was dressed in white and green blazers and pants, in the spirit of independence. The kind of impromptu tour he had just chosen would have gone better with denim pants and rain boots. The imperative for him to assess the situation himself as the pragmatic that he is, however, has no time for sartorial correctness. Ortom visited Wadata Market, Rice Mill, Awe (Wurukum) Street, Designated Park and Benue Links Transport Company Headquarters, all the way to Kucha Utebe. He inspected the surroundings of Benue State Teaching Hospital, all located in the state capital. Makurdi was indeed underwater. Apart from Makurdi local government area, Guma, Gwer West, Katsina-Ala and Agatu, are other provinces held to the throat by the floods.

Ortom was accompanied by officials from his administration and federal parliamentarians. Bem Mzondo and John Dyegh, representing the federal constituencies of Makurdi/Guma and Gboko Tarka; Ortom Chief of Staff Tivlumun Nyitse and Benue State Emergency Management Agency (BESEMA) Director Emmanuel Shior were part of the Governor’s delegation. Felix Atume, a Fellow of the Nigerian Academy of Engineering (FA Eng), was also on the tour. They were told that the Benue River, Nigeria’s second largest body of water, was one of those negatively affected by the release of excess water from the Lagdo Dam in neighboring Cameroon. The Lagdo burst also afflicted the Katsina-Ala River, the second largest in Benue State, precipitating developments similar to Makurdi’s experience.

An estimated 126,000 people from 24,000 households were affected by the floods. The state government temporarily moved them to a camp for internally displaced persons (IDPs) in Makurdi. This is expected to aggravate the situation of the IDPs in the state, so far precipitated by the untoward activities of Fulani herders in the state, with makeshift structures sheltering them, scattered across the state. Ortom estimates his voters at over a million, as having long since been uprooted from their homeland. In addition to this reality, no less than 5,000 hectares of cultivated rice and other crops have been destroyed by the recent flooding. The macroeconomics of this will impact food sufficiency and security, in the weeks and months to come. Benue State is also famous for the massive cultivation of yams, sorghum, sesame seeds, groundnuts, oranges and mangoes among others.

Ortom alluded to the federal government’s previous commitment to dredge the Benue River, a promise that has not been fulfilled to date. Former transport minister under President Muhammadu Buhari, Chibuike Rotimi Amaechi, while defending his ministry’s budget in the national parliament in 2017, bluntly stated that the river would be dredged. Vice President Yemi Osinbajo during a visit to Benue State later in 2017, Amaechi repeated, adding that drainage channels will be created to effectively mitigate water flows. A contract worth N34 billion was then reportedly awarded for the dredging, which was not carried out five years later.

Whether this was blocked by senior professional advice on the challenges of leveling the preponderance of rock outcrops in the riverbed, or by feasibility studies on the economic viability of the exercise, has not been established. Ortom believes, however, that the apathy towards the project is consistent with the laissez-faire disposition to all things Benue State in the eyes of the federal government. He challenged lawmakers representing the state in the National Assembly to dig deeper into the matter to determine the actual status of said contract which has remained a ding-dong affair for five long years. He observed that a similar disaster occurred in 2012, exactly 10 years ago, and questioned the government’s ability to anticipate disasters and plan for their improvement.

Offering his perspective as an engineering expert, Atume noted that the ferocity of the floods was accentuated by the blocked channels which are usually the natural pathways of water. He observed that in some cases floodplains had been abused and converted into residential estates. In many cases, he noted that water was a possible enemy, coming back to haunt his attackers. Atume alluded to the massive siltation and sedimentation of the river bed, as well as the irresponsible practice of pollution through the indiscriminate dumping of non-biodegradable materials, especially plastics.

Also a member of the Nigerian Society of Engineers (FNSE), Atume noted, “Water moves with intense force and great speed. It is very heavy, very powerful. You have to let it flow otherwise it will create its own outlets”. According to him, the government must muster the political will to do what it takes to resolve the situation, because it will have to make difficult decisions in some cases. “The government must tackle the outright demolition of structures where natural courses have been obstructed,” he said. “The channels will then have to be designed taking into account the existing geophysical particularities, to allow circulation without water”. Atume also expressed concern over a critical mass of Lekki’s reach in Lagos State. He fears that much of the primordial body of water has been momentarily removed in the name of reclamation for physical development. The water, he noted, will one day find its level.

Benue State Governor appealed to Ministries, Departments and Emergency and Relief Agencies (MDAs) to come to the immediate aid of the state to appease the plight of his people, as he addressed the Media in Kucha Utebe: The various places affected by the most recent floods, it is clear to me that we need help from everywhere. From the Ministry of Emergency and Disaster Management; the National Emergency Management Agency (NEMA) and other like-minded bodies, we need all the help we can get at this difficult time. Support from donor agencies will also be greatly appreciated.” According to Ortom, the current experience cannot be managed solely by the state government, in an environment where dwindling resources impact the seamless functioning of the state.

A delegation from the Nigeria Governors’ Forum (NGF) met on Friday, October 7 with Buhari at the State House, Abuja. Led by the outgoing chairman of the body, Kayode Fayemi of Ekiti State, they drew the attention of President Muhammadu Buhari to the challenge of floods across the country and demanded the swift and decisive intervention of the government. federal. Buhari advised the forum to engage with Water Resources Minister Suleiman Hussein Adamu to articulate an action plan and come back accordingly, so that the federal government “will see what can be done”. It remains to be seen how this suggestion will improve the urgent, present and pressing situation of the people of Benue State, given the snail pace of bureaucracy in our superstructure of governance.

Olusunle (PhD) poet, journalist, scholar and author, is a member of the Nigerian Publishers Guild (NGE)

Opinions expressed by contributors are strictly personal and do not belong to TheCable.

Here are the most popular fast food brands in America