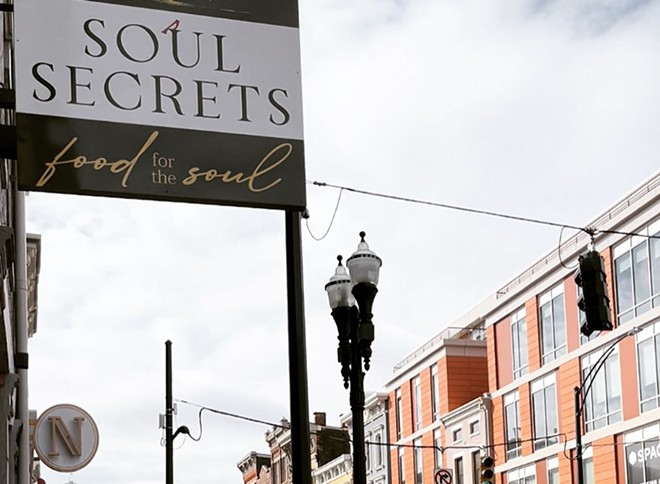 Soul Secrets is located next to Nostalgia Wine & Jazz Lounge on Vine Street in Over-the-Rhine.

Entrepreneur Candice Holloway brings a taste of her grandmother’s cooking to Over-the-Rhine.

The fast-casual eatery focuses on soul food with a menu that includes family-recipe fried chicken, fried fish, cornbread, collard greens, hoppin’ John and mac and cheese, as well as a selection of meatless dishes like vegan salisbury steak and vegan pie. Brunch will launch this summer with dishes including shrimp and grits, chicken and waffles.

“I’m just doing what my grandmother would have done if she could,” Holloway says in a statement from 3CDC, which praises her for the storefront.

For more than a decade, Holloway ran his own consulting firm focused on home healthcare and initially launched Soul Secrets “as a corporate catering service and a way to connect with his teenage daughter”, says the press release.

When the pandemic hit, Holloway says she turned away from her business to work full-time on Soul Secrets.

“We had started doing pop-ups and we were getting so many phone calls asking if we were open because people didn’t know we were a restaurant-only business. I knew it was time to open a restaurant where we could share all of our family’s recipes with anyone who wanted to try them,” she says.

Prior to COVID, Soul Secrets was part of Findlay Launch, what 3CDC calls “an acceleration program for food-related businesses, with an intentional focus on supporting BIPOC, women, and immigrant-owned businesses.” , but the pandemic has put the kibosh on this program .

“Someone from 3CDC contacted around the same time asking how they could help us take our business to the next level and I immediately told them we needed a permanent space,” says Holloway.

Soul Secrets is open Tuesday through Sunday. See the full menu and schedules online at soulsecretscincy.fr.

Send CityBeat a news or tip or submit calendar event.

Enjoy a 120-foot buffet at StoneFire Pizza Company in Wisconsin