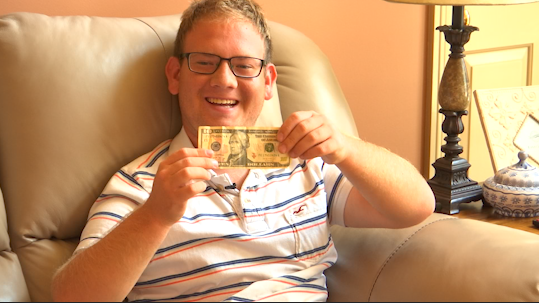 BLOUNT COUNTY, Tenn. (WATE) – It’s the little things that can have a big impact on someone; a Blount County McDonald’s employee with special needs received a gift that many would not appreciate.

About a month ago, Ben Cody saw a hiring sign outside his local McDonald’s. He decided to apply and got the job. “I do cleaning stuff,” he says.

Ben’s favorite part of the job is nice people and good food. His mother said he was adopted and born with a unique condition, “He has fetal alcohol syndrome and it made reading and math very difficult.”

However, that did not stop him from achieving his goals. “He does everything he can to the best of his abilities,” adds Alisa.

While working at McDonald’s, he sees a lot of returning customers, but there’s one he didn’t know who helped him make his day. He explained: “So I was taking people’s food out to the parking lot and as I was coming back I saw this guy say ‘Hey, here’s a ten and a five.'”

TN Census 2020: Only 13 counties have more population than Neyland Stadium

“This man doesn’t realize how much that tip meant to Ben and I just want him to know and others to know, you can make a difference in people’s lives by something small like this,” he said. Alisa said.

For now, Ben is clinging to those two bills, but he thinks he knows what he wants to spend them on. “Spend it, maybe cars,” he said, showing off his collection of toy cars.

NOAA predicts a 70% chance of a La Niña winter. Here’s what it means where you live

He may never see that client again, but he said if he did, “I would say thank you very much and bless you very much. You don’t know how you made my day. You really are a good person. That’s what I would tell him.

One small gesture made a big difference for this special McDonald’s employee. Ben just moved to McDonald’s on Alcoa Highway across from the airport.

Alisa said he loved it when people just came over to say hello. She also said that none of this would be possible without the help of her professional and professional coach who helped her get the job.